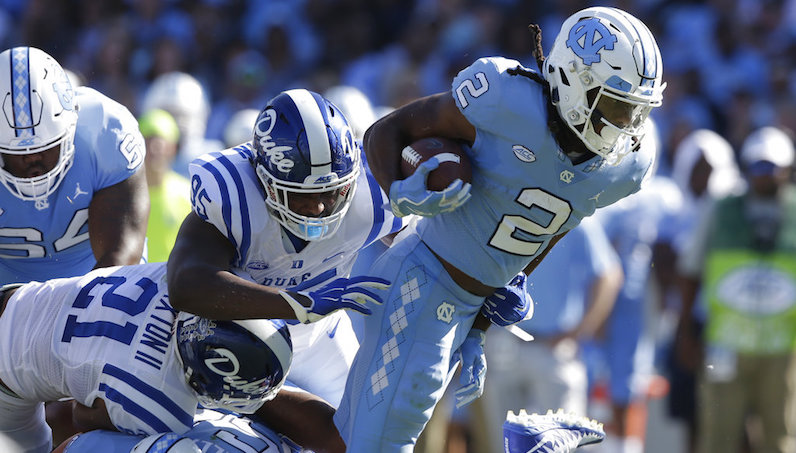 A lot has gone right for Duke football this season as the Blue Devils have leapt out to a 4-0 start. Daniel Jones looks like an NFL prospect; Shaun Wilson and Brittain Brown are recreating Thunder and Lighting — plus the defense has been outstanding.

As head coach David Cutcliffe said this week, though, the Blue Devils will face their toughest competition yet on Friday: Miami and Mark Walton. Is the defense up to the challenge?

Walton entered the season as the ACC’s top back; through his first two games, he’s easily lived up to that hype.

According to Sports Reference, Walton is one of only two FBS players this season to average more than 12 yards per carry, on more than 20 carries. The other: Clemson’s Travis Etienne, who is awesome.

Miami certainly hasn’t played the toughest opponents yet — although Toledo is no slouch — and a horrible natural disaster ripped up their city. There was that, too.

It’s possibly premature to read too much into Miami’s numbers, but this is sports media, baby. We love to overreact.

Thanks in part to his offensive line, Walton has been incredibly productive. According to Football Study Hall, Walton has an Opportunity Rate of 66.7 percent. That means that on two-thirds of Walton’s 27 carries, the offensive line has done its job — i.e. blocked for five yards worth of running room.

On the season, 13 of Walton’s carries (48.1 percent) have gone for first downs or touchdowns; the running back also has 11 carries of 10-plus yards — nasty.

As a team, the Hurricanes rank No. 1 in the FBS in Opportunity Rate (62.5 percent) and third in Isolated Points per Play (1.47). So far, Miami has been efficient and explosive.

Walton will now have to face some of the toughest competition of his career, too, though. Duke is one of only 19 FBS teams holding opposing ball-carriers to three or fewer yards per carry, according to Sports Reference.

A big part of that success has been a defensive line that’s dominated. The Blue Devils rank third nationally in opponent Opportunity Rate — 25.8 percent, per Football Study Hall. That’s slightly better than Alabama at No.4 — 26.3 percent. It’s stingier than other traditional power defenses, too: Michigan and Clemson.

Duke football still ranks No. 1 in the FBS in Havoc Rate as well; on 29.3 percent of the team’s defensive plays, Duke records a tackle for loss, forces a fumble, or defends a pass. As a unit, Duke has collected 35 tackles for loss (7.5 per game) — good for No. 3 in the FBS, behind only Ohio State and Penn State.

Senior defensive tackle Mike Ramsay has been the anchor for David Cutcliffe; Ramsay has six tackles for loss, which have accounted for a combined minus-38 yards per opponents. Joe Giles-Harris has been a monster, too.

The linebacker not only has an interception on the season; he also has a team-leading nine run stuffs — tackles at or behind the line of scrimmage, per Football Study Hall. Defensive end Tre Hornbuckle has contributed seven run stuffs, too.

Ben Humphreys, the roommate and close friend of Giles Harris, is probable for Friday’s game, which is a huge deal for Duke.

It’s somewhat of an odd setting to see Duke and Miami set to play on a Friday night under the lights. However, this is just one of the realities of televised college athletics in 2017; it only adds to the intrigue, though, as Miami returns to Durham for the first time since…well, you know.

Regardless, it’s safe to say that come Saturday morning, one of these teams won’t be at the top of these respective rushing lists. And the other will more than likely be victorious.

Could Duke quarterback Daniel Jones declare for the NFL after this season?