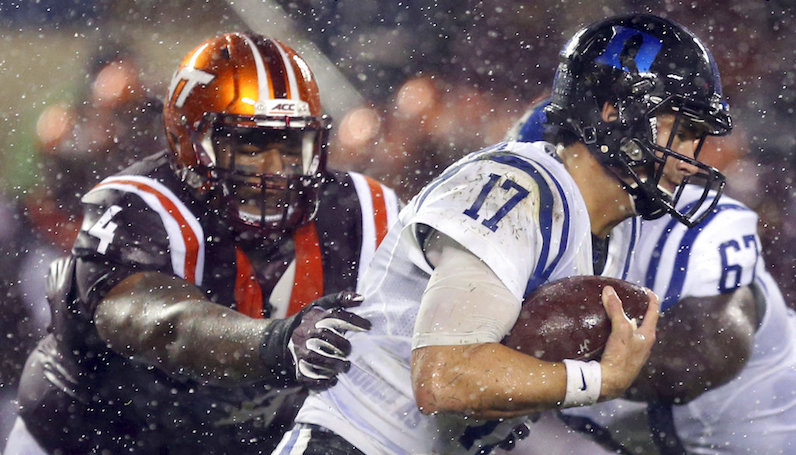 Virginia Tech football is gearing up for its third major game of the 2017 schedule. Next Saturday, the Hokies travel south to South Beach for a date with Miami. For Virginia Tech to get back to the ACC Championship game, it needs a win against a top-10 Hurricanes squad that plays on a razor’s edge.

If Tech’s defense performs again like it did against Duke, then it may be time to start looking up hotels in the 704 area code.

Hey, I like to go out in the rain

Daniel Jones would love to quickly forget what happened in the rain of Blacksburg on Saturday. He may want to burn the tape, too. Virginia Tech’s defense, aided by the weather, clamped down on the Blue Devils.

Jones completed just 10-of-24 passes (41.7 percent) for 82 yards, no touchdowns and an interception. According to Sports Reference, Jones’ game was just the second time in the ACC this season a player has attempted 20 or more passes for fewer than 100 yards and a completion rate under 50 percent.

Ironically, the only other time this has occurred this season also came this week. Boston College’s Anthony Brown completed 6-of-20 passes for 54 yards in the team’s victory over Florida State. Somehow, the Seminoles lost this game by 32 points.

The star in the slop on Saturday night was safety Terrell Edmunds; the junior safety recorded eight tackles, a quarterback hurry and an interception.

After Virginia Tech’s first scoring drive of the game — a 4-yard touchdown run of Deshawn McClease (his third of the season) — Edmunds intercepted a pass, and returned it 15 yards on the first play of Duke’s drive. The grab came on a misthrown deep ball from Jones — and a gorgeous halo catch by Edmunds.

For his efforts, Edmunds was named ACC defensive back of the week. Edmunds isn’t the first Hokie ballhawk to claim this honor, either. The week prior, sophomore defensive back Reggie Floyd snagged the award, thanks in part to a 69-yard interception return for a touchdown. Floyd’s performance of course came against North Carolina — when Virginia Tech held the Heels to one of the lowliest offensive outputs of the season.

On the season, Virginia Tech’s defensive back rank fourth nationally in Havoc Rate, per Football Study Hall — 10.2 percent. Havoc Rate is a statistic that measures the percent of plays a team, position group or player either defends a pass, records a tackle for loss or forces a fumble.

What Wake Forest will miss on offense without Greg Dortch