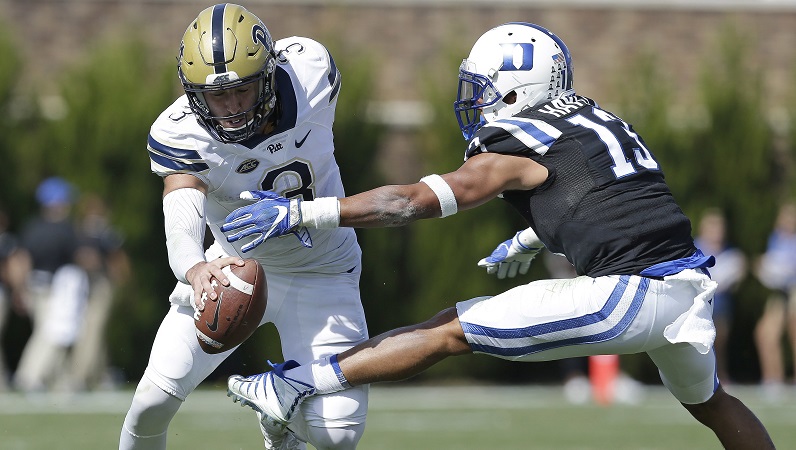 When Max Browne had surgery Oct. 11 to repair his right shoulder following a shot he took against Syracuse, Ben DiNucci was all set to become the primary starting quarterback for Pitt. But after the Panthers burned Kenny Pickett’s redshirt and played him heavily in the NC State game, does Pitt have another quarterback controversy?

It didn’t seem that way Saturday at Duke, as DiNucci went all the way and led the Panthers to a 24-17 victory over the Blue Devils.

DiNucci only completed eight of 18 passes for 149 yards. But he didn’t throw any interceptions or make any other catastrophic decisions to harm Pitt’s chances.

For the time being, DiNucci is Pitt’s quarterback, though the presence of Pickett, now eligible to play, looms as a motivator.

DiNucci got his first significant action for the Panthers in their 59-21 blowout loss to Oklahoma State. He also played heavily the next week against Georgia Tech. After completing 25 of 44 passes for 338 yards, two touchdowns and two interceptions against OSU and Georgia Tech, Pitt went back to Browne.

Browne, who was shaky early on, was back in complete command of the Panther offense Sept. 30, when Pitt took down Rice 42-10 for its second win of the season. DiNucci attempted just two passes that day.

But then came Alton Robinson’s shot on Browne in the third quarter of Pitt’s 27-24 setback to Syracuse. DiNucci returned to the Pitt huddle and led a drive that resulted in eight points midway through the fourth quarter. But in the game’s final seconds, DiNucci got smashed on a short carry, knocking him temporarily woozy.

Pickett, a true freshman from Oakhurst, New Jersey, got the call. Needing a Hail Mary miracle, Browne fired a shot across the middle for a game-ending 13-yard completion.

Pickett followed that up with considerable action in Pitt’s setback to N.C. State, as he completed five of 13 passes for 61 yards. He added 18 rushing yards.

What was interesting about the insertion of Pickett in the NCSU game was that DiNucci wasn’t necessarily playing poorly. The Panthers were competitive in the game, and weren’t forced to take him out due to an injury or technicality. The QB situation created subtext after the NCSU game in what was otherwise another ho-hum ACC loss for the Panthers.

Narduzzi said that DiNucci and Pickett were notified of the decision to share time. In turn, DiNucci said, ‘“I wasn’t necessarily aware going into this week that they were going to try to get him (Pickett) a series, but that’s ultimately their decision.”

Narduzzi said after the Duke game that during practice last week, he asked DiNucci if he thought Pickett might be needed. DiNucci said that he wouldn’t.

With Pickett no longer redshirting, the Pitt coaches have no reason not to give him playing time. That is, unless DiNucci is playing well, and the Panthers are winning.

So, will Panther fans be seeing Pickett and DiNucci down the stretch as they attempt to find a long-term solution? The two are similarly-sized quarterbacks who can both make things happen with their legs. It’s an open situation for Pickett and DiNucci to battle it out, and let their play on the field settle the issue.

For at least the Duke game, DiNucci was the answer. But we haven’t seen the last of Kenny Pickett leading the Panther offense this season.

Read more: Is Pitt the worst program in the ACC?