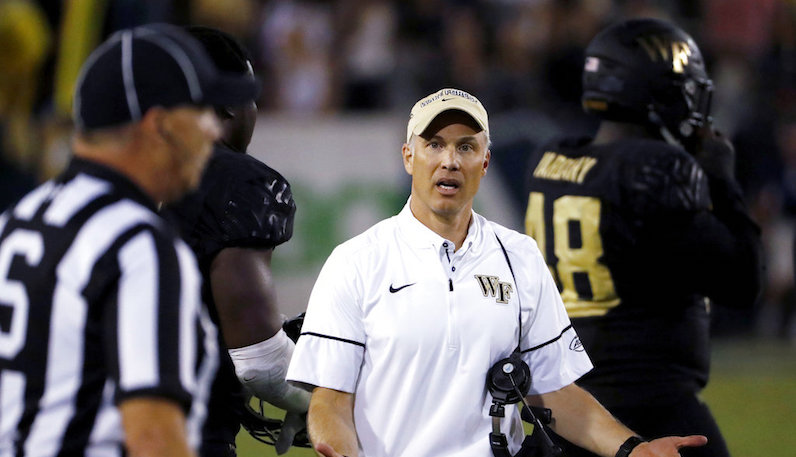 Recruiting at Wake Forest is an interesting balance.

The basketball and football programs are not the kind of powers that will attract players at the top of the recruiting rankings. The Deacons don’t boast the massive fanbase or winning traditions of other programs. In addition, the school is one of the top 30 academic institutions in the country, which means it places higher classroom standards than most most schools do on the athletes it recruits.

So coaching staffs have to make decisions on multiple levels about who are the best athletes who can succeed at Wake Forest, but also just who will even want to come to Wake Forest. Spend too much time on too many who won’t come, and you’ve missed out on the best who would have come.

Many staffs have been accused of shooting too low. Basketball coach Dave Odom — despite his success — rarely targeted top prospects. Odom didn’t believe in wasting time on players he believed would reject Wake Forest anyway, so he often recruited around the fringes, including internationally.

While he sometimes succeeded in finding gems, he also frustrated the fan base with a number of players who just didn’t end up being ACC caliber. His tenure was full of transfers, and the program always seemed just one player away from something much bigger.

Remember the 1995-96 team that Tim Duncan carried to the Elite Eight, despite no bench and a starting lineup that included Sean Allen, who averaged 5.5 points and 4.0 rebounds? What if you gave Josh Howard and Darius Songaila one more running mate; what might have happened?

Ironically, the top ranked player that Odom ever recruited, Loren Woods, transferred away after one disappointing season.

Jim Grobe took much the same approach to football recruiting, and it worked … until it didn’t. Operating on the fringes, taking chances and constantly relying on developing players that most other ACC programs wouldn’t take is difficult. While the stars align sometimes — more often, they don’t.

Both Danny Manning and Dave Clawson have taken a different approach.