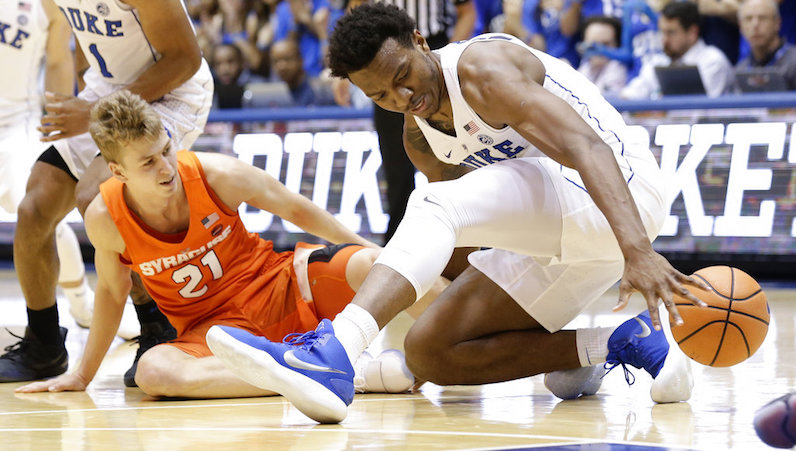 For the first time since Syracuse’s stunning comeback win over Virginia in 2016, two ACC teams will meet in the NCAA Tournament. Duke and Syracuse — hey, there’s a familiar name! — will travel west to Nebraska for with a bid to the Elite Eight on the line.

This, of course, is not the first time Duke and Syracuse have faced one another this season; four short weeks ago, the Blue Devils hosted the Orange in Durham. Duke proved victorious that Saturday evening, 60-44, in a game that won’t exactly be commemorated in the Naismith Hall of Fame.

Zone defenses took center stage — Duke and Syracuse combined to score 104 points on 107 combined field goal attempts. (I was in Cameron for this game: trust me, it wasn’t exactly Basketball Utopia.)

However, as these two teams get ready to face-off again, let’s take a quick glance at what worked — or didn’t work — for both teams.

Syracuse shot the ball 54 times in this game from the field — making 17 (31.5 FG%). Fast break opportunities were low for the Orange; Duke turned the ball over only 11 times. According to Synergy Sports, Syracuse went just 6-of-20 (30 FG%) on spot-up attempts.

Most of the team’s offense that day boiled down to Tyus Battle and Frank Howard dribbling twice and passing the ball back and forth. Battle and Howard went a combined 4-of-11 on spot-up attempts, per Synergy — with two of those makes coming from beyond the arc.

It can be a challenge to run ball screens against a zone defense, but Syracuse tried that process a few times, though. Howard and Battle combined to go 3-of-8 on field goal attempts out of the pick-and-roll — not surprisingly, six of those eight attempts came from beyond the arc.

According to KenPom, this was Syracuse’s least efficient offensive game of the season — just 0.69 points per possession. Howard and Battle went a combined 4-of-18 from beyond the arc; as a team, Syracuse was just 6-of-25 (24 3P%) from deep.

This bodes well for Duke, because all season long, Syracuse has struggled against zone defenses: 0.83 points per possession (40.8 FG%), per Synergy. That ranks 305th in Division I.

This wasn’t a banner day for Duke, though, either. The Blue Devils scored just 0.93 points per possession, according to KenPom — Duke’s least efficient offensive performance of the season, too.

Duke was able to find some easy offense in transition, thanks to 17 Syracuse turnovers. The Blue Devils missed all four of their transition three-point attempts, but shot 6-of-8 inside the arc — with all eight of those attempts coming at the rim.

In the half-court, though, Duke struggled against the length of Syracuse’s zone. As a team, Duke went just 2-of-18 on three-point attempts (11.1 3P%); Gary Trent and Grayson Allen, Coach K’s top two shooters, were unusually bricky. Trent and Allen went a combined 1-of-12 from deep in this game.

For Duke, the Syracuse game also marked the return for Marvin Bagley, who missed the four previous games.

While the Blue Devils functioned highly sans Bagley, his arrival to the active lineup that Saturday meant a great deal. Bagley came off the bench, shot 8-of-9 from the field and scored 19 points. According to Synergy, Bagley was 7-of-7 on attempts after a cut; he also flushed six dunks in this game, too.

Thanks to some accounting from the wonderful Adrian Atkinson, we can look up and see that Bagley leads the ACC with 92 dunks. Duke, as a team, has 224 dunks this season, which is also tops in the ACC.

Can Bagley get loose again against Syracuse, one of the five most efficient defenses in the nation? If the Orange hold him in check (good luck), and get another cold shooting performance from Allen and Trent, then Syracuse could possibly pull off another upset.