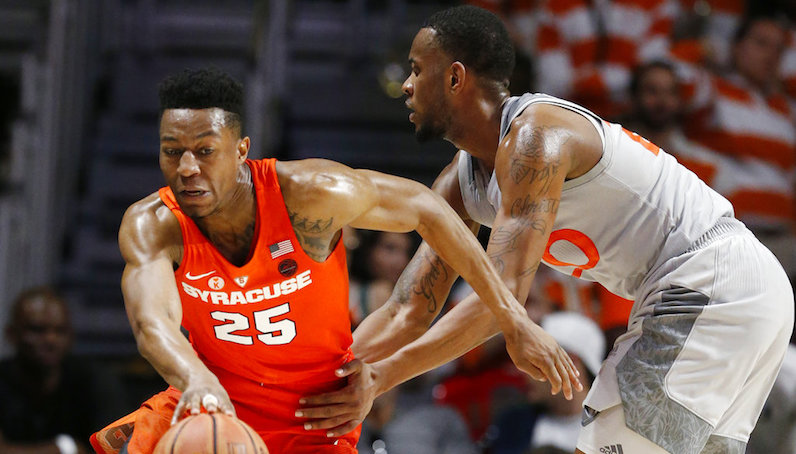 It’s this simple: No player in the ACC is asked to do more than Syracuse’s Tyus Battle. The sophomore guard plays 38.7 minutes per game; in ACC play, Battle is somehow averaging 40.1 minutes per game — the result of a double overtime game against Florida State.

Battle has played 95.1 percent of Syracuse’s available minutes this season — the second highest rate in the nation, per KenPom. Two of his teammates — Frank Howard (93.6 percent) and Oshae Brissett (92.9 percent) — also rank inside the top 12. This is all, of course, the result of Jim Boeheim playing a super-tight rotation that would make even his former Team USA Basketball colleague Tom Thibodeau blush.

Over the last five games, according to KenPom, Battle has played 100 percent of Syracuse’s two guard minutes.

However, it’s important to remember: it’s not just the minutes Battle plays that makes him so special; it’s what he does on the floor that’s special, too. According to Synergy Sports, Battle has used 552 possessions this season — No. 1 in the ACC, and 19 more than his closest counterpart (BC’s Ky Bowman).

When Battle is on the floor this season, 28.1 percent of Syracuse’s possessions have ended with the Battle shooting the ball, drawing a shooting foul or turning it over. That ranks No. 3 in the ACC, per Sports Reference. Of note: Battle has a turnover rate of just 11.3 percent, which means he’s shooting and getting to the line…a lot. Battle ranks third in the ACC in free throw attempts (147) — right behind Brissett (155).

According to Sports Reference: Since the 2009-10 season, only 23 players have played at least 38 minutes per game, and had a usage rate above 27 percent. Battle could become the first ACC player to do this since Cat Barber’s incredible 2015-16 season.

Tyus Battle leads Syracuse is win shares and win shares per 40 minutes. Basketball is a joyous team game, but clearly, no one on this roster is more valuable to Syracuse’s team success than Battle. For the Orange to make a run in March, Battle must continue to play heavy minutes and delivery in leverage situations.

BracketMatrix.com currently projects Syracuse as a No. 11 seed for the 2018 NCAA Tournament. KenPom predicts the Orange to go 1-3 over its final four regular season games, which would truly put this team on the bubble — depending on what happens in Brooklyn.