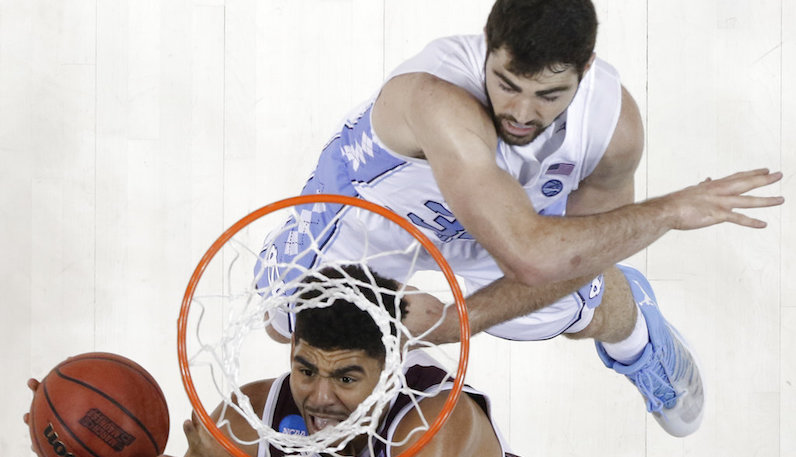 It jumped off the screen in North Carolina’s upset defeat to No. 7 seed Texas A&M: The Aggies were bigger than the Tar Heels, and dominated inside.

The TAMU frontline of DJ Hogg (6-foot-9), Robert Williams (6-foot-10) and Tyler Davis (6-foot-10) got whatever it wanted against UNC basketball. Here’s a quick check at just how productive those three were in Sunday’s win.

Paint about it, UNC Basketball

Texas A&M shot 51.7 percent from the field — with an effective shooting rate of 60 percent. That’s the third highest effective rate UNC’s defense has allowed all season. On non-post-up possessions around the hoop, A&M went 16-of-25 (64 FG%), per Synergy Sports. To the surprise of no one: Davis, Williams and Hogg led the way.

All of this came against a UNC defense that, per Synergy, ranks 28th nationally in defending these types of attempts: 1.03 points per possessions, 50.4 percent shooting.

North Carolina had issues defensively this season, especially when it came to defending the three-point line. The Heels, however, did mostly well defending the post, which makes A&M’s performance even more impressive. Opponents shot 46.3 percent on post-ups against UNC, per Synergy, and just 45.3 percent on two-point attempts — No. 20 in the nation.

UNC basketball found airspace unfriendly on the other side of the floor, too. The Aggies blocked eight shots — or 17 percent of the two-point field goal attempts North Carolina put up on Sunday.

North Carolina had just 11.1 percent of its two-point attempts rejected this season, per KenPom. So this second round upset isn’t a crazy outlier; however, it’s certainly above the team’s rate for the 2017-18 campaign.