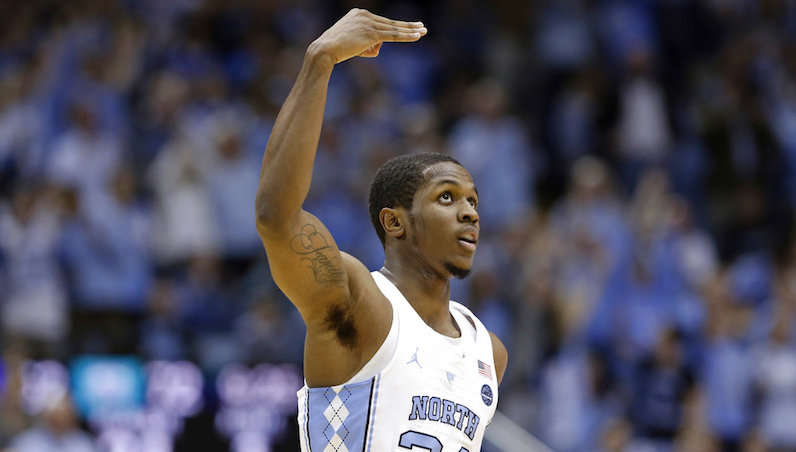 It rarely disappoints when North Carolina and Duke square off in basketball; Thursday night in Chapel Hill was no different. UNC basketball won (breaking news, I know) in a tightly-contested affair, 82-78. Let’s take a deeper look into the why, shall we? (“Yes!” – You)

The Blue Devils held the lead over the Tar Heels for the majority of the first half, and a very small window of the second half, too. At the 19:08 mark, freshman guard Trevon Duval hit two free throws to give Duke a 51-47 lead. At the time, UNC had a 33.6 percent chance of winning the game, per KenPom.

What ensued over the next few minutes — a blitzkrieg, as Tim Brando would call it on the play-by-play — changed the outcome of the game, and helped create a wildly entertaining contest.

Kenny Williams got off to a fantastic start this season; regression was to be expected, but he’s managed to mostly keep that up into conference play. However, everyone knew grad transfer Cameron Johnson would add yet another dimension to UNC’s offense when he returned from injury, too.

So far, that combination has been pretty (*summons inner Roy Williams*) daggum good.

According to Synergy Sports, North Carolina ranks fifth in the ACC in spot-up efficiency: 1.01 points per possession, 39.1 percent shooting (52.6 eFG%). That effort has been led by Williams and Johnson.

There are 62 players with at least 50 spot-up possessions in the ACC this season, per Synergy. Williams and Johnson rank eighth and 14th, respectively, in efficiency on spot-ups. To have this production along with Luke Maye, an inside-out scoring threat, the playmaking of Theo Pinson and veteran scorer Joel Berry is a formidable punch. Just ask Duke.

The Blue Devils went to a zone defense for long stretches of time on Thursday night. This defense is a bit of security blanket for Duke’s staff; however, UNC’s zone offense blitzed them with spot-ups. Williams and Johnson accounted for 15 of North Carolina’s 25 spot-up possessions, according to Synergy, and went a combined 10-of-20 on 3-pointers.

North Carolina’s transition attack has certainly had its ups and downs this season; losing a dynamic wing like Justin Jackson certainly didn’t help that cause. While the team’s efficiency has fluctuated — 1.01 points per possession, good for 10th in the ACC — that won’t stop them from running. That’s simply not in Roy Williams’ basketball DNA.

The Tar Heels racked up 18 transition possessions — compared to just 10 for Duke, another uptempo offense. After Duval hit that second free throw to put Duke up four, UNC ripped off a 10-0 over the next three minutes of game play.

This one is a little more obvious: North Carolina was outstanding on the glass. In the second half, there were 28 rebound opportunities after a UNC miss — the Heels grabbed 15 of them, good for an offensive rebound rate of 53.6 percent.

Meanwhile, UNC kept Duke, the No. 1 offensive rebounding team in the nation, off the glass. Duke snagged just four offensive rebounds in the second half. Marvin Bagley accounted for two of those boards; Wendell Carter, future lottery pick, had none.

Once again, Johnson was a hero with eight total rebounds — four on offense, four on the defensive end.

Charlotte Hornets coach Steve Clifford constructs his roster with two core principles: defensive rebounding and avoiding turnover at all costs. Well, he would be doubly proud of UNC basketball on Thursday night.

In a game that featured a lot of possessions, North Carolina turned the ball over just two times — a turnover rate of 3.1 percent, according to KenPom.