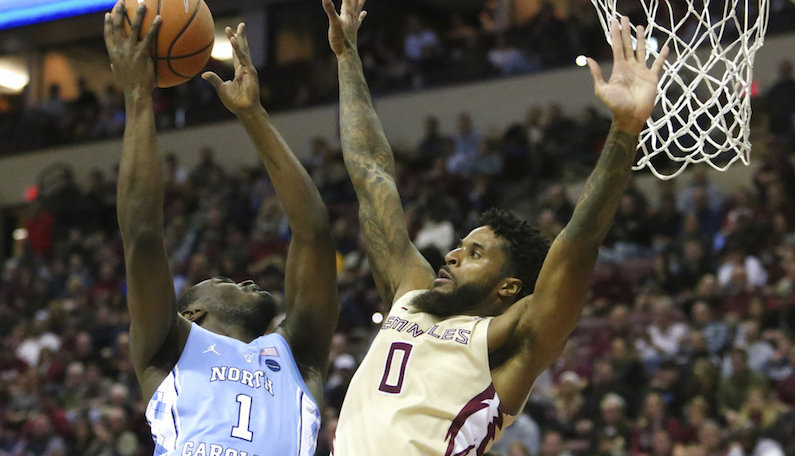 North Carolina's Theo Pinson attempts a shot over the defense of Florida State's Phil Cofer in the first half of an NCAA college basketball game, Wednesday, Jan. 3, 2018, in Tallahassee, Fla. (AP Photo/Steve Cannon)

North Carolina basketball wants to play fast. I know when I think UNC hoops, my mind immediately wonders to this team’s secondary break — how the Tar Heels desire to push the pace. This season is no different in that regard, really.

UNC once again features an offense that can be electric. The Tar Heels ranks 13th in adjusted tempo and 10th in average offensive possession length (14.7 seconds), per KenPom. That all checks out; as does an offensive rating inside the national top 25. It’s not the top-10 unit we’ve seen each of the last three seasons; however, it’s still pretty darn good.

The Heels have been solid on defense this season, too, but this team is falling off in a secondary statistic that could also hamper the team’s offense.

Over the first 15 games of the season, North Carolina’s defense has forced just 74 steals — less than five per game. That’s not a great number, especially for a team that plays at a faster pace (more possessions). To be more specific: UNC ranks No. 317 in the nation in steal rate; the Tar Heels have forced a steal on just 6.6 percent of opponent possessions, according to KenPom.

That number has increased in the team’s first two league games — 8.1 percent — which is encouraging. But it’s slightly down from the trend of the past few seasons.

As you can see, North Carolina’s defense — over the last five seasons — has hovered around a steal rate of about 10 percent. Clearly, that mark is down this season, though. Joel Berry is forcing fewer steals this season; plus, Nate Britt and Kennedy Meeks — both of whom had individual steal rates above two percent — are gone.

It’s not just steals, though. UNC is forcing fewer turnovers in the half-court, too. According to Synergy Sports, opponents of the 2016-17 Tar Heels turned it over on 16.4 percent of their half-court possessions. That’s down to 14.7 percent this season.

After forcing a turnover rate on post-up possessions of 14.8 percent last season, that’s dropped to 8.4 percent this season, per Synergy.

It’s still early in the season, and there’s likely some randomness in these number, but could this be why North Carolina’s transition offense is a little off to start the season?

That said: While UNC has gotten on the break this season, the Heels have had some issues. North Carolina is shooting under 52 percent on transition attempts, and scoring 0.99 points per possession, according to Synergy. In terms of efficiency, that ranks in the 28th percentile nationally, and tied for 10th in the ACC with Syracuse.

The 2008-09 championship team, led by speedy Ty Lawson, scored nearly 1.2 points per possession in transition. That year, UNC scored 825 points in transition — nearly 200 more than the next closest team (Syracuse, 647).

So, despite a lower steal rate, and a lower defensive turnover rate, UNC appears to be getting into transition at a steady rate. However, the team’s efficiency — at least early on — is sort of lagging. There’s something more here than just a defense that’s producing fewer run-outs or whatever.

This shouldn’t come as much of a shock: When you lose bad players, regression can easily follow. While the 2017 Tar Heels weren’t exactly the Showtime Lakers on the break, they made it work. Unfortunately for UNC, though, three of the team’s best transition players departed.

Justin Jackson grooved his way to ACC Player of the Year last season in part because of his ability to splash three-pointers on the break. Jackson sizzled with an effective shooting rate of 66.3 percent in transition, and scored 1.21 points per possession — 11th in the ACC.

It wasn’t just Jackson, though. His wing shooting also helped open up the lane for hard-running bigs, like Isaiah Hicks and Tony Bradley. Hicks and Bradley shot a combined 72.5 percent from the floor in transition, and scored 90 points on 71 possessions (1.27). All of that is now gone.

This is a place where the newly-added Cameron Johnson can help, too. Johnson can make the team spacier in the half-court and on the break. According to Synergy, he scored 1.3 points per possession in transition last season at Pitt — No. 5 in the ACC (minimum of 50 possessions).

This season’s freshmen trio of bigs has actually been pretty efficient in transition, albeit in a much smaller sample. Garrison Brooks, Sterling Manley and Brandon Huffman are a combined 14-of-20 (70 percent). Those guys simply don’t get out much on the break, though — just 26 combined transition possessions.

Luke Maye has been an absolute stud for UNC this season; however, the junior forward hasn’t quite found his footing in transition: 50 percent shooting (12-of-24), 0.93 points per possession, according to Synergy.

Inside The Playbook: Cameron Johnson helps open up new “deadly” lineups for UNC