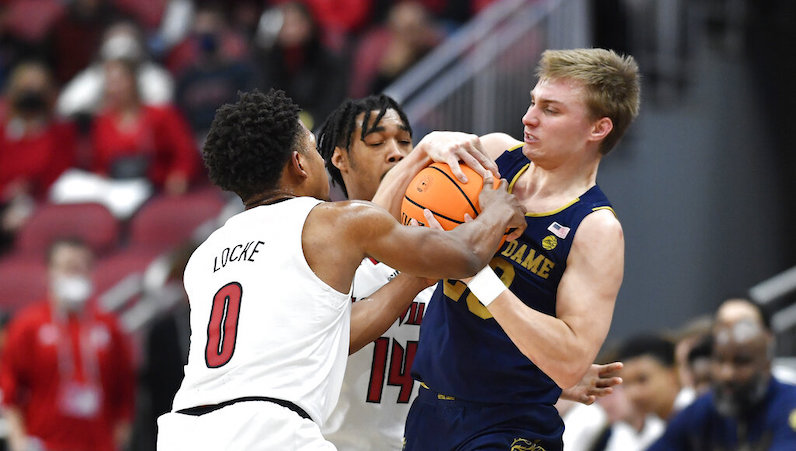 A busy offseason for Louisville basketball continued in recent days. Not only did Kenny Payne add Duke assistant coach Nolan Smith to his staff, but two players from this season’s roster — Dre Davis and Noah Locke — entered the transfer portal.

Locke committed to Louisville and Chris Mack this time last year; after three seasons with Florida, the veteran guard would, in theory, help boost an anemic perimeter shooting roster. He led the team in scoring at 9.6 points per game, but on the whole, Louisville’s offense took a big step back.

During ACC play, Locke shot it well from deep: 38 percent on 3-point attempts. For the season, he was a little lower: 34.2 percent from downtown. Louisville ran a portion of its offense through Locke, hoping his shooting would unlock other parts of the floor. The results were marginal at best, though.

Overall, Locke shot under 39 percent on his 2-point attempts and recorded an assist rate of only 7.7 percent. Similar to his time at Florida, Locke is a pure catch-and-shoot player.

Meanwhile, Davis finished up his second season with the Cards as one of the better wing defenders in the ACC: 2.6 percent block rate, 1.7 percent steal rate. Davis doesn’t get a ton of block and steals, but he’s a physical presence on that side of the floor. (Louisville’s old defensive scheme could also deflate blocks and steals numbers.) Davis will guard a variety of position types; his effort and versatility on that side of the floor always pop on film.

On offense, though, well, Davis is a little rough. Davis shot just 23-of-101 (23.8 3P%) from beyond the arc over the last two seasons. He has a decent, funky post-up game for a wing, but that’s only getting you so far. His career assist-to-turnovers numbers aren’t great, either: 8.0 percent assist rate, 19.3 percent turnover rate.

Louisville now has five players from its roster in the transfer portal, including Davis and Locke: Samuell Williamson, Matt Cross and Gabe Wiznitzer.

Payne, however, received commitments to the program from Sydney Curry and El Ellis.