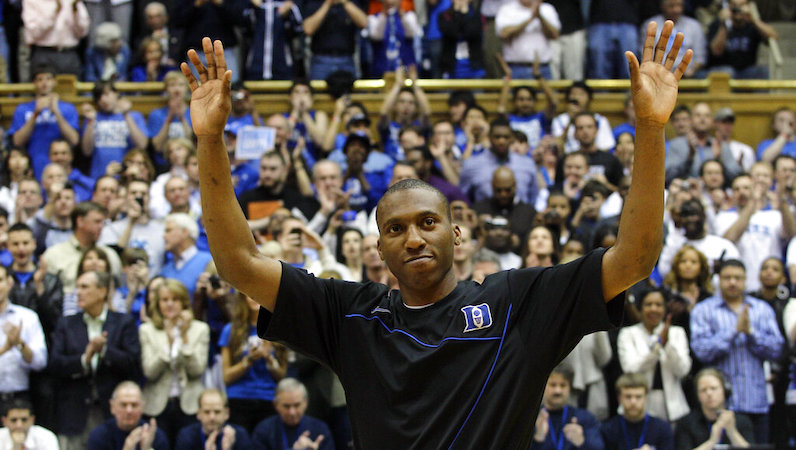 Nolan Smith, one of the top young names in the college coaching ranks, is on the move in the ACC. Smith, 33, who has been a key part of the coaching staff at Duke since 2016, will join Kenny Payne as the Associate Head Coach for Louisville.

Former NBA guard Nolan Smith has spoke with Duke’s men’s basketball staff and told them he plans on accepting a job as associate head coach with new head coach Kenny Payne at the University of Louisville, a source told @andscape. Smith’s late father Derek starred with the Cards.

This is a big loss for the Blue Devils; Smith, a former star at Duke (2007-11), is a future head coach and a key recruiter, especially in the DMV area, which is where Smith was raised. Two of Duke’s key players this season — guards Trevor Keels and Jeremy Roach — both hailed from outside of Washington DC.

Initially, Smith joined Mike Krzyzewski’s staff as a special assistant in Feb. 2016. He was then promoted to Director of Basketball Operations and Player Development in March 2018. In April of 2021, Smith became an assistant coach — once Nate James left for Austin Peay.

Given his talents as a coach, Smith would always have opportunities beyond Duke. Back in 2020, he interviewed for a position on Penny Hardaway’s staff at Memphis, although he elected to remain with Duke.

Beyond basketball, Smith emerged as a civic leader within the community of Durham, especially following the murder of George Floyd in the summer of 2020.

After leading Duke to an NCAA Championship in 2010. Smith was a first round NBA Draft choice in 2011. He spent two years with the Portland Trail Blazers.

Duke’s staff was already headed for a massive shift this offseason — with the retirement of Coach K and the shift to Jon Scheyer. Smith was set to have a big role on that staff; the No. 1 recruiting class for 2022 will arrive in Durham this summer. However, the chance to return to his hometown — Smith was born in Louisville — and grab a key position on Payne’s staff was quite the offer.

For Louisville, this is an excellent addition. And for Smith, well, his on the doorstep for his own head coaching opportunity when the time arrises.

Inside The Numbers: Sydney Curry returns as a key frontcourt piece