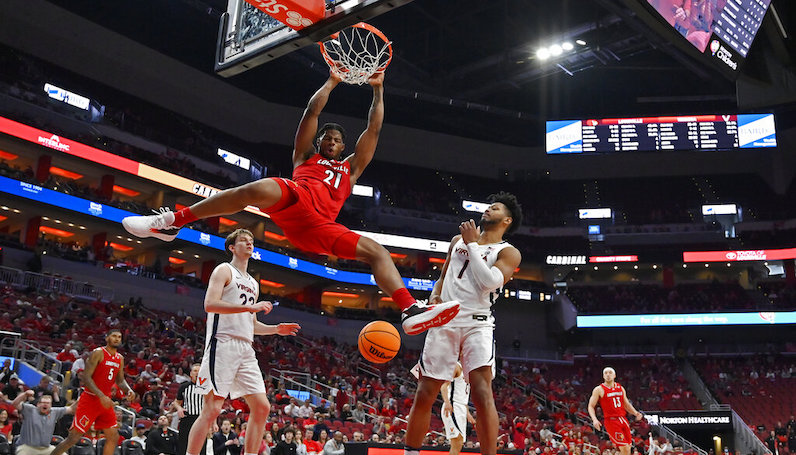 After an outstanding run in the JUCO ranks, Curry arrived to Louisville for the 2021-22 season. It took time, but Curry — a burly 6-foot-8, 260-pound post-up target — emerged from a crowded frontcourt room to become one of the team’s most productive players.

Now, in lieu of transferring, he’ll return for the 2022-23 season. This is a big deal for Payne. Curry will return to the ACC as one of the league’s most productive big men.

Curry shot 69.8 percent from the floor in ACC games.

It wasn’t just more playing time, though. Curry took on added usage, too, while delivering even more efficient offense. Over the final 10 games of the season, Curry’s usage rate ballooned to 28.5 percent.

Curry can use his power and frame to carve out space, while also getting off the floor quickly enough to finish over longer defender.

Overall, Curry shot 71.4 percent at the rim this season, including nine dunks. Over half of Curry’s rim field goals were unassisted, too, which speaks to his power on the offensive glass.

Louisville started to run plays for Curry, including this Horns slice screen set to roll the big man down to the block.

The post-up game is an avenue for Louisville to feature Curry. He’s almost always a strength advantage and he moves quickly, which makes him a magnate for contact.

Curry shot 68 percent on post-up field goal attempts this season, per Synergy Sports, which was a top-15 number in the ACC among players with 30+ possessions.

Those are the type of numbers that will force double teams.

In a smaller sample, Curry showed he can pass out of the post: 2.9 assists per 100 possessions.

On this after-timeout possession at Wake Forest, Louisville runs Iverson fan action; Noah Locke comes across on the Iverson cut, which is immediately followed by Samuell Williamson setting a third screen for Curry. This gets Curry on the edge of the defense, moving downhill.

As he turns the corner on Matthew Marsh, Jake LaRavia must help over. Dre Davis sees this, cuts to the rim and Curry finds him for the spike.

Another easy way to involve Curry in the offense is within the pick-and-roll game. Curry isn’t a dangerous above-the-rim lob threat; however, he’s good rolling into space, getting downhill and finishing through contact.

Empty-corner pick-and-roll set should absolutely be a part of the back for Curry in 2022-23.

According to Synergy Sports, Curry shot a sizzling 70.8 percent when he rolled to the basket after a screen or a slip this season.

Curry’s shown an ability to hurt defenses out of the short roll, too. Even when he’s unable to roll all the way to the rim, Curry can catch the ball in the middle of the lane and make a play.

Often, that’ll result in Curry using his power/quickness to make a secondary push to the basket. Once again, though, this is where Curry’s short-space passing game helps.

LaRavia, Mucius declare for 2022 NBA Draft, will maintain eligibility too