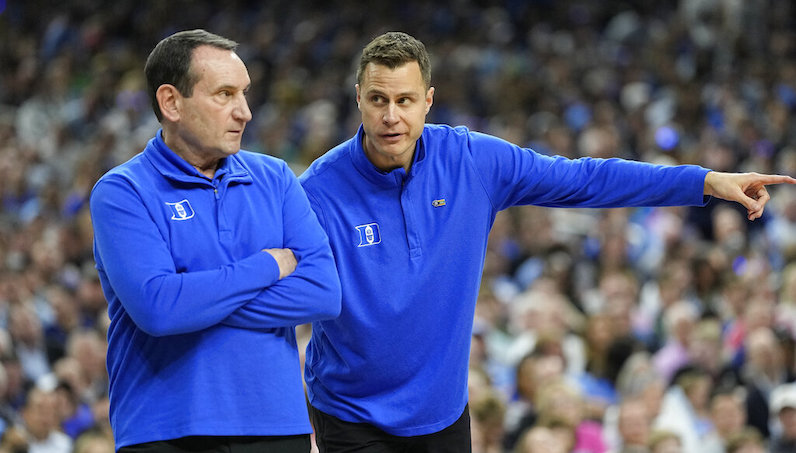 Tyrese Proctor is headed to Duke. A busy recruiting week for the Blue Devils continues with the addition of Proctor, one of the top international prospects in the 2023 recruiting cycle.

Proctor, who hails from Australia, plays at the Canberra (AUS) NBA Global Academy. In the end, the 6-foot-4 guard picked Duke over Arizona and the G-League Ignite development pathway.

Two months ago, back in February, Proctor took an official visit to Duke. Proctor was at Cameron Indoor Stadium to see Mark Williams tap in the game-winner vs. Wake Forest. This all came together quickly; Duke only offered Proctor a scholarship in January.

Obviously, this is a big win for Scheyer as he takes over in Durham. Arizona is a powerful, resurgent program. The Wildcats have an international recruiting footprint, too, which will likely accelerate under head coach Tommy Lloyd.

Back during the 2021 cycle, Dyson Daniels, another prolific international prospect from Australia, signed to play for the G-League. His play has been stellar this season with the Ignite. Daniels projects as a lottery pick for the 2022 NBA Draft.

Dyson Daniels vs. Peyton Watson/PnR Ice defense: gets Watson on his hip, as soon as Caleb Furst moves in direction of screener Daniels shifts and darts through the gap of Watson and Chet Holmgren pic.twitter.com/aV7TI82cJU

The Blue Devils now have four commitments for 2023, including two 5-star guards: Caleb Foster and Jared McCain. Due to his international status, not every recruiting service ranks Proctor; however, he’s considered a 5-star talent, too. He’s viewed as a Top 25 Prospect for this class. Sean Stewart, a 4-star power forward, completes the quartet.

Duke, however, likely isn’t done here. Mackenzie Mgbako, a 5-star small forward, will announce his college decision on Friday, April 8. Mgbako is participating with Proctor at the Nike Hoop Summit; he’s considered a Duke lean, although Memphis, Ohio State and Kentucky are also in the mix.

Mgbako is a priority recruit for Scheyer in this class, according to reports.

Currently, Duke projects to have both the No. 1 2022 and 2023 recruiting classes. This is a helluva start for Scheyer as the program transitions beyond Mike Krzyzewski.

The mix of the 2023 group is interesting, too. There’s a plenty of versatile and offensive creation. Assuming there are no reclassifications, the Blue Devils will bring in three high-level guards.

Now, McCain is viewed as more of an off-ball guard; Duke showed him tape of Seth Curry when he took his official visit to Durham. Curry’s carved out an excellent NBA career while working as more of a combo guard and an off-ball mover. There’s some interesting ways Duke could pair McCain and Jaden Schutt, an incoming 2022 freshman and an elite off-ball/movement shooter.

However, adding dual creators like Foster and Proctor could be dynamic — provided the offensive blend is good. Dot the arc with multiple creators and attack.