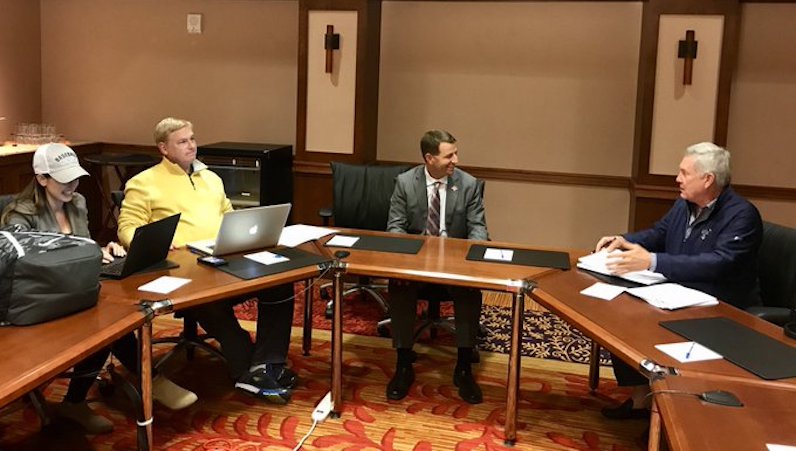 Before they were competitors together in the ACC, Mack Brown talks with Clemson coach Dabo Swinney in 2017. (Photo: Brown's Twitter account)

Last September, Clemson survived a thrilling road contest at North Carolina with a 21-20 victory, thanks to a two-point conversion stop with 1:17 left in the fourth quarter. This proved to be Clemson’s lone one-possession win during the regular season; every other victory, prior to the CFP, came by 14 or more points.

Once again, Clemson and North Carolina are involved in another contest of sorts. This time, though, it’s taking place off the field.

With recent commitments from 5-star running back Will Shipley, 4-star linebacker Barrett Carter, and 3-star quarterback Bubba Chandler, Clemson’s 2021 recruiting class has vaulted back up to No. 3 in the 247 Sports team rankings — just ahead of North Carolina. The Tar Heels check at No. 4. (Shipley committed to Clemson over NC State and UNC.)

In total, the Tigers have 12 commits for 2021, including 10 4-star prospects. This is sort of old hat for Clemson, especially in recent years: the Tigers dominate the recruiting trail. Compared to other ACC programs, Clemson is (currently) in a league of its own. Clemson has the No. 3 recruiting class in the county, despite suffering a de-commit from 5-star defensive end Korey Foreman, the No. 1 overall player in the class.

UNC, on the other hand, is in somewhat unfamiliar territory. Led by Mack Brown, North Carolina’s resurgent recruiting efforts have drawn plenty of attention, though. With 14 commits, including 10 4-star prospects, UNC has dominated in-state recruiting.

The Tar Heels have commitments from five of the top 10 prospects in the state of North Carolina, including Drake Maye, Keeshawn Silver and RaRa Dillworth. More could be on the way, too. UNC is on pace to generate its first top-10 recruiting class since 2007, per 247 Sports. That bunch, assembled by Butch Davis, was headlined by Marvin Austin, the No. 4 overall prospect. (This was just the start of things to come, infamously, between Austin and UNC.)

(North Carolina posted the No. 12 recruiting class in the country back in 2009, too.)

UNC has continued to recruit well during the pandemic, but it will be a challenge to maintain that top-five billing. For that distinction to stick, the recruitment of Jahvaree Ritzie, a 4-star defensive end from Kernersville, is significant. Ritzie ranks as the No. 63 overall prospect in the 2021 class, per 247 Sports. He’s also the No. 4 prospect in the state of North Carolina and a prep teammate of Dillworth.

Going back through the 247 Sports database, the ACC has just one occurrence with two programs producing top-five classes in the same year — and it comes with an asterisk. Back in 2004, Florida State produced the No. 1 class in the country. In that same cycle, Miami produced the No. 3 class. Of course, Miami didn’t join the ACC until the 2004-05 academic year, when the 2004 recruiting class arrived as true freshmen. (Miami accepted the invitation to join the league June 30, 2003.)

This group gets counted because every player in the class signed with program that was headed to the ACC, months before National Signing Day in 2004. Even then, however, it’s still been nearly two full decades since the ACC, as a conference, stacked two top-five classes in the same calendar year.

This is but one fairly arbitrary and over-simplistic measurement. The margins are so thin between some of these classes; mere decimal points determine the difference. A tiered system is a better mechanism for itemized rankings and evaluation. Plus: while there may be some correlation, alternative recruiting services will grade classes differently. 247 Sports is just one source, albeit a solid one. Issues with class size and scalability exist, too.

However, it’s not as though ACC programs have recruited poorly in this timeframe. With expansion and the rise of Clemson, the conference has continued to recruit well, overall, and pump players into the NFL, although the SEC is in it own category here.

Prior to the 2004 recruiting class, the ACC had four other cycles with two more top-10 classes in the same year.

The early signing period in December is still seven months off; beyond that, the 2021 class won’t go final, officially, until several months later. Plenty of movement is on the horizon. Georgia and Oregon have just seven and eight commitments, respectively. Six of Georgia’s seven commits rank inside the top 170 nationally. Once more players start to pick schools, the Bulldogs — currently ranked 20th in the FBS, per 247 Sports — will ascend in the rankings. That’s just one example.

Ritzie may well end up deciding between UGA and UNC, two of his top programs. Ohio State, Tennessee and South Carolina are in the mix as well. (Ohio State and Tennessee rank first and second, respectively in in the 247 Sports class rankings, currently.)

Of course, the COVID-19 pandemic will continue to have an impact on recruiting matters, too. The NCAA recruiting dead period was once again pushed back to July 31. Prospects hoping to get on campuses for visists this summer may be out of luck, as programs work to find and improve new, remote methods of correspondence.

Depending on how the fall shapes up, too, with actual football games, travel and what’s physically possible/safe, well, there’s just a lot that could change between now and then. For the time being, though,