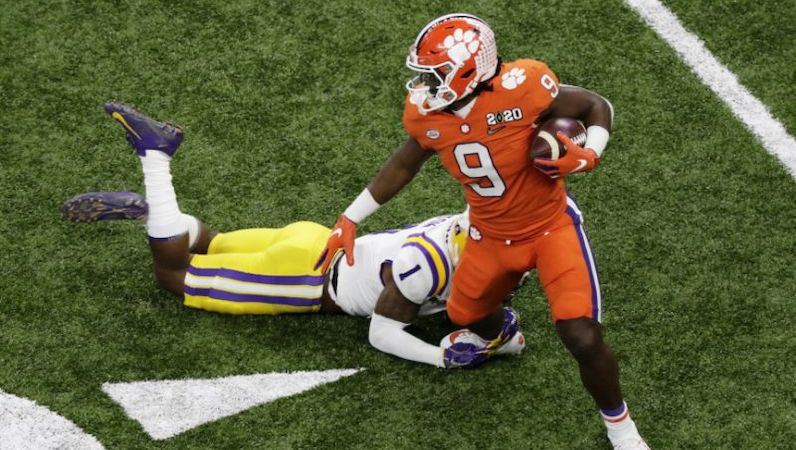 Will Shipley will follow Travis Etienne at the running back position for the Clemson Tigers. (AP Photo/Eric Gay)

Will Shipley, the No. 1 prospect for the state of North Carolina in the 2021 class, will head south and play for the Clemson Tigers. On Tuesday, Shipley, a running back, committed to Clemson over in-state programs NC State and UNC, along with Notre Dame and Stanford on the national level.

247 Sports ranks the 5-star Shipley as the No. 24 overall player in the 2021 recruiting cycle. This is a nice get for Clemson, which saw its top 2021 prospect — 5-star defensive end Korey Foreman — decommit two weeks ago.

Clemson continues to find recruiting success in the state of North Carolina, too. When the Tigers won the CFP in 2017, Clemson’s roster featured 20 players from the Tar Heel State, including stud defensive tackle Dexter Lawrence.

Currently, Clemson has seven players on its roster from North Carolina, including former 5-star defensive end K.J. Henry, who hails from Winston-Salem. As a redshirt freshman in 2019, Henry recorded 2 sacks.

As a sophomore, Shipley ran for 1,417 yards and 19 touchdowns — with 393 yards receiving and six touchdowns.

UNC recruited the in-state Shipley very hard; the same can be said for Dave Doeren and NC State, where Shipley has family ties. Both of his parents are alums of NC State.

However, after looking like a Notre Dame lean for a period of time, Shipley picked Dabo Swinney and the Tigers. Shipley will arrive to Clemson just as the program looks to turn the running back position over from the electric Travis Etienne.

Read More on Will Shipley and Clemson Football

Isaiah Simmons drafted No. 8 overall by the Arizona Cardinals