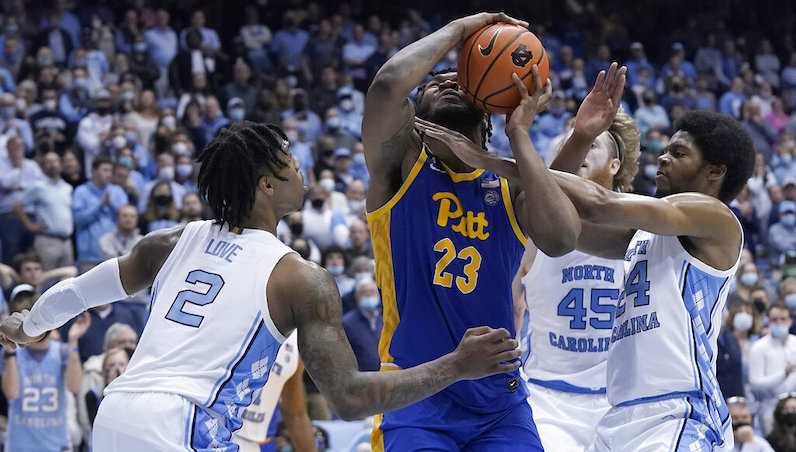 Caleb Love is one of the biggest mysteries in the ACC. As rosters continue to fluctuated with transfers and NBA Draft decisions, Love looms as one of the more obvious swing pieces in college basketball.

Last week, North Carolina put the college hoops universe on notice when Armando Bacot and Leaky Black announced plans to return for the 2022-23 season. Starting point guard RJ Davis is set to run it back, too. Now, Love is the next big decision on the horizon.

Whatever Love decides: it’ll have a massive impact on North Carolina’s 2022-23 roster.

Currently, Love is gathering feedback from NBA talent evaluators, while also participating in the Iron Five Barnstorming Tour. During a stop last week in Gastonia, Love told Ross Martin of Inside Carolina that a decision will come soon. Love wants to gather as much information on his potential draft range, then make a final call.

If Love returns to college basketball, it’ll only be to North Carolina. That likely goes without saying, but it’s worth clarifying, too.

However, with a strong showing as UNC marched to the NCAA Tournament Championship Game, Love may have played himself back into the field as a draft hopeful. At the least, Love could test the draft waters and maintain his eligibility for a return.

If Love returns to UNC, along with every other player, Hubert Davis will be at his limit of 13 scholarships, as RL Bynum mentioned last week at the Tar Heel Tribune. Those numbers already factor in the transfer decisions of Dawson Garcia and Anthony Harris.

Of all the players on North Carolina’s roster, sophomore wing Kerwin Walton could be the most impacted by Love’s decision.

During the 2020-21 season, Walton emerged as one of the best shooters in the country. He was just a freshman, who started the year as a backup; however, Walton became an offensive lynchpin for the Tar Heels.

As the 2021-22 season approached, Walton seemed like an excellent fit with a more modern North Carolina offense. Unfortunately, Walton strong to maintain a spot in the rotation. Walton missed time due to COVID-19 protocols. When he was on the floor, though, Walton struggled defensively and lacked confidence in his beautiful jump shot.

North Carolina’s coaching staff also elected to start and go all-in on the de facto double point guard lineup of Davis and Love this season, which squeezed Walton even further. (For whatever it’s worth, Love, who has his own issues on defense, had more leeway with the staff. His defensive breakdowns rarely, if ever, resulted in a minutes reduction.)

UNC with RJ Davis/Love/Leaky/Manek + Bacot on the floor, per Pivot Analysis: +269 in 575 minutes

According to Evan Miya's data: this is now the most-played lineup in the ACC this season

A look at the team 7 lineups in the ACC (300+ possessions) in terms of adjusted efficiency pic.twitter.com/lxztS5JIhH

Walton played in all 29 games of his freshman season, including 20 starts: 21.0 minutes per game. UNC’s offensive collapsed when he sat on the bench that year.

Down the stretch of the season, Walton sat for the entire game against a handful of opponents: Duke (twice), Syracuse (overtime), Baylor (overtime), UCLA and Kansas. Walton played only five total minutes in the NCAA Tournament.

According to Pivot Analysis, UNC was -32 in 415 minutes with Walton on the floor this season, including a defensive rating of 115.4 points per 100 possessions.

What’s Caleb Love go to with it?

If Caleb Love returns for his junior season, that means a lot of minutes, shots and on-ball opportunities will get routed in the direction of No. 2. Love averaged 34.2 minutes and 13.7 field goal attempts per game this season. He also led UNC with a usage rate of 25.4 percent.

It’s possible that Hubert Davis could sell Walton on an increased role — as a starter — even if Love returns. For that to happen, though, UNC would need to downsize around Bacot, play Black as a small-ball 4 and then roll with Davis, Love and Walton. That seems unlikely, given how UNC played things this season, along with the presence of hybrid forwards Puff Johnson and Dontrez Styles.

Walton played only 179 minutes with Black this season, per Pivot Analysis: UNC+15.

Regardless of Love, Walton could also just want to stick at North Carolina — despite the struggles this season and the departure of Garcia, a fellow Minnesotan. That’d be perfectly normal, too. Chapel Hill is a fun place to play basketball. In which case, Davis could sell him on a featured role coming off the bench for North Carolina. It’d be a massive boon for North Carolina if Freshman Year Walton returned in as an off-the-bench 3-point gunner.

If Love and Walton both return, though, there’s very real opportunity cost, assuming all other scholarship players are back as well.

It’s possible that another scholarship player — not Kerwin Walton — could also exit the program.

TSJ: All The Way?

Currently, there are close to 1,400 men’s basketball players are in the transfer portal. There’s a lot of talent to be found in this group, including powerful wing Terrence Shannon Jr., a former Texas Tech star who played at IMG Academy with Bacot.

If UNC somehow gets everyone back + lands Terrence Shannon Jr. in the portal: RJ Davis, Caleb Love, Leaky Black, TSJ and Bacot is a daunting college lineup, with Puff Johnson off the bench

Shannon is one of the best defensive wings in the country. He’s 3-point stroke has improved, too, which amplifies his catch-and-go game on offense.

According to Jon Rothstein, UNC was one of the many programs that reached out to SMU transfer guard Kendric Davis. The 6-foot Davis is a dynamic primary creator and an excellent shooter. Davis has a career assist rate of 33.3 percent. During the 2021-22 season, Davis shot 86.8 percent from the free throw line and 37.2 percent on his 3-point attempts.

Scouting Notebook: More on the ACC prospects at the 2022 PIT