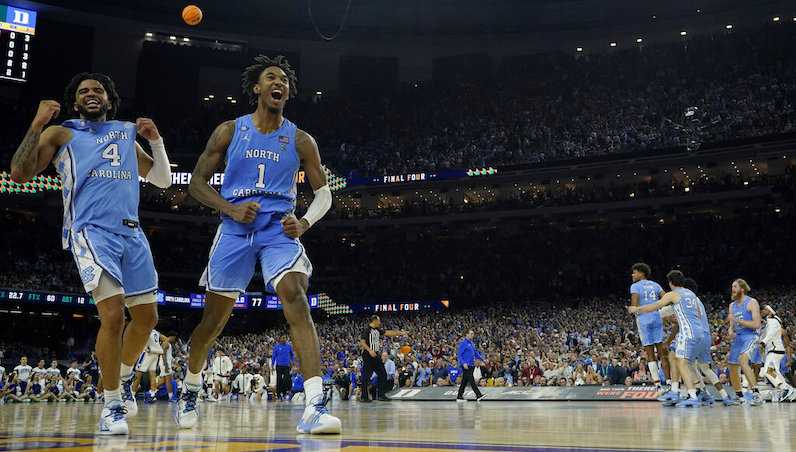 Leaky Black will return and the party continues in Chapel Hill. The 2022-23 season will by Black’s fifth year with North Carolina basketball. The 6-foot-8 wing forward will use his extra year of eligibility (due to the COVID-19 pandemic) and return to school for one final season.

Over the last four years, Black has been a mainstay for UNC basketball. During his college career, Black has appeared in 122 games, making 97 starts. Known more for his defense, Black has compiled career numbers of 613 points (5.0 per game), 515 rebounds, 284 assists and 124 steals.

As a senior, Black started 38 games in the 2021-22 season. The only game Black missed was the early-season loss to Jaden Ivey and Purdue. Black has long been a productive defender for the Tar Heels; however, he took his coverages to another level this season.

The on-ball defense was excellent against a variety of position and player types. Think about some of the assignment Black took this season: Paolo Banchero, AJ Griffin, Justin Lewis, Dereon Seabron, Johnny Juzang, Ocahi Agbaji — the list goes on.

Black also made big strides as an off-ball/team defender, too.

With Black on the floor this season, North Carolina was +307 in 1,127 minutes with a net rating of +16.5 points per 100 possessions, according to Pivot Analysis.

Black is a really solid source of secondary playmaking for North Carolina’s offense. He can handle the ball and finish around the cup, although his usage rate of 10.0 percent this season is as small as you’ll find for a full-time starter in the ACC.

Hubert Davis did a nice job of using Leaky Black as an off-ball screener in a several of half-court sets. Watch as Black sets a pin-in screen for Brady Manek in the corner, while Bacot rolls to the rim. This is referred to as “exit” action, and it’s a good way to utilize a non-shooter in the half-court offense.

Here’s more of that “exit” action. This time, though, Black’s screen in the corner helps open the middle of the floor up for a rolling Armando Bacot.

The name of the game is defense and passing, but Black also showed increased confidence as a shooter this year. Black connected on 17-of-51 3-point attempts (33.3 3P%), which is mostly so-so efficiency on low-volume shooting. But it was enough to keep the offense moving.

Black even stepped in to confidently drain some relocation/catch-and-shoot 3-point attempts this season, which was encouraging. This is an obvious area for Black to focus on in terms of development. If he improves as a 3-point shooter, it would do wonders for North Carolina’s half-court offense and post his stock as a possible NBA prospect in 2023.

Earlier this week, North Carolina’s All-ACC center Armando Bacot announced that he, too, will return for the 2022-23 season.

Currently, Caleb Love remains a bit of a wildcard for North Carolina. A decision will come soon, but Love, who has the door open for a return to UNC, will consider his options as an NBA Draft prospect.

If UNC somehow gets everyone back + lands Terrence Shannon Jr. in the portal: RJ Davis, Caleb Love, Leaky Black, TSJ and Bacot is a daunting college lineup, with Puff Johnson off the bench

Regardless of Love’s decision, North Carolina projects as one of the better names in the country next season. Leaky Black will be a major part of the formula for success, too.

Beyond The Numbers: How RJ Davis made meaningful strides as primary ball handler