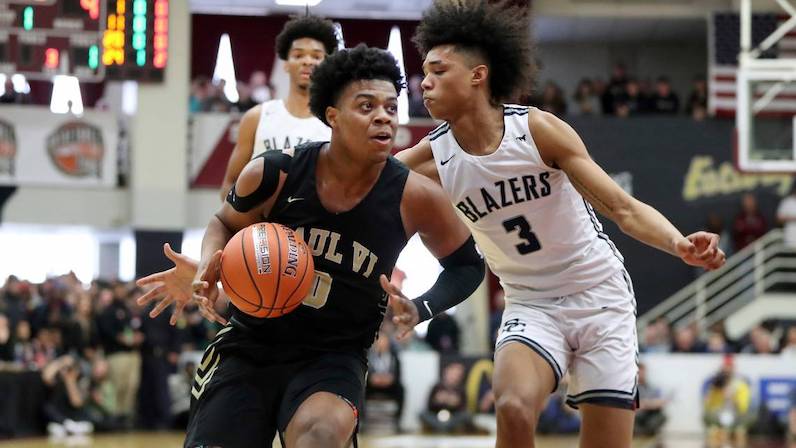 Trevor Keels, a 5-star shooting guard in the 2021 recruiting class, drives to the basket. (AP Photo)

Trevor Keels will head to Duke. On Friday, Keel announced his commitment — joining Duke’s three-man 2021 class. A native of Virginia, Keels is a 6-foot-5 wing and consensus top-20 prospect in the 2021 recruiting class.

The Blue Devils now have commitments from three 2021 5-star prospects: forwards AJ Griffin and Paolo Banchero, arguably the top two players in the class, and Keels.

Going back to last fall, Duke held a slight advantage over Virginia and Villanova. In February, however, a fourth team was added to the mix: Kentucky. The Wildcats offered Keels. In the end, though, Duke won out.

Associate head coach Jon Scheyer led Duke’s recruitment of Keels. Scheyer continues to emerge as one of the top young recruiters in the country. Keels was unable to go on any official visits, due to COVID-19.

It certainly doesn’t hurt that point guard Jeremy Roach, a teammate of Keels at Paul VI, now plays at Duke, too. Roach just finished his freshmean season. With DJ Steward headed to the NBA Draft, Roach and Keels project as Duke’s starting backcourt next season.

According to Keels, Roach played a key role in his decision-making process.

Going a little further: Duke’s starting lineup should be rather powerful. Assuming Mark Williams returns, he’s the starting center. Duke would then pair that with Banchero and Griffin and the 4 and 3, respectively. Roach and Keels would then slot in as the starting guards.

Wendell Moore Jr. has yet to announce his decision: return to Duke for junior season or perhaps enter the draft. If Moore is back, he would certainly contend for a starting role; he played rather well down the stretch for Duke. WMJ could also turn into a super-sub for Duke: come off the bench, help at multiple positions and vie for ACC Sixth Man of the Year.

(All of this, of course, assumes that All-ACC sophomore stretch-4 Matthew Hurt will leave for the NBA Draft, too.)

That’s a really strong first five; however, given the amount of talent leaving the program via the draft and transfer portal, Duke may need to add more firepower. Power forward Henry Coleman, an excellent team defender, and wing Joey Baker will certainly factor into the rotation, strongly. (Again, that’s assuming both players return.)

Duke is still in the running for 5-star forward Patrick Baldwin Jr., too. Baldwin is one of top shooters in the class. If Baldwin were to commit to Duke, too, it would greatly change the trajectory for next season, along with Duke’s rotation.

Regardless, Duke could also look for added help via the transfer market.