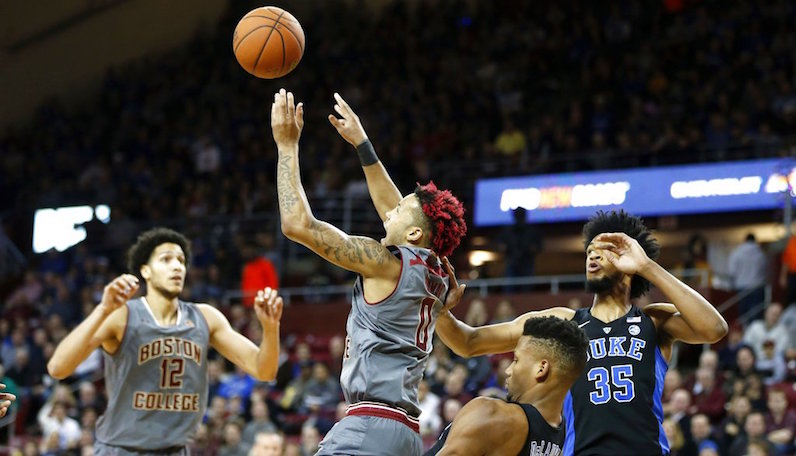 Boston College's Ky Bowman (0) reaches for a rebound against Duke's Javin DeLaurier (12) and Marvin Bagley III (35) during the first half of an NCAA college basketball game in Boston, Saturday, Dec. 9, 2017. (AP Photo/Michael Dwyer)

Back in early April, both halves of Boston College’s stud backcourt declared for the NBA Draft: Jerome Robinson and Ky Bowman. The decisions made sense for both players; testing the draft waters is an invaluable opportunity for any college player with NBA dreams or goals. There’s basically no risk or reason not to go for it, if presented with the opportunity.

A few weeks before the draft combine in Chicago, Robinson — a first team All-ACC guard — announced his decision to hire an agent; he would remain in the draft. The 6-foot-4 Robinson isn’t a first-round lock for June’s draft; however, he’s slid into the backend of plenty first round mocks.

Bowman, on the other hand, wasn’t invited to the combine, although he’s worked out with several teams: Houston Rockets, Boston Celtics, Oklahoma City Thunder and the Atlanta Hawks — among others.

A menace in the pick-and-roll and shooting off the dribble, Bowman was unlikely to remain in the draft past the May 30 deadline. However, you never know: it’s the decision of the player.

The BC Rumor Mill

On Tuesday, multiple Boston College Twitter accounts (not affiliated with the school or basketball program) kicked out some moderate confirmation of what many of us already expected: Ky Bowman will likely return for his junior season.

BREAKING: 4th And Dude (same guys who broke the Jairus commit a month before he announced, nbd) has confirmed that Ky Bowman is fully expected to withdraw from the NBA draft before tomorrow’s deadline. Not a huge shock, but a big relief nonetheless. #Sources @BookofBC @bcatleagle

That was followed up by Evan Gray — who covers Boston College hoops for Eagle Action.

With Ky Bowman Back…

The loss of Jerome Robinson is serious. Robinson (20.7 PPG) was the team’s best player, and a special mix of high usage (27.3 percent) and efficiency (60.8% true shooting). Assuming he does in fact return, Bowman will be critical to replacing some of that production.

Robinson’s departure could hinder one of the things Bowman does best, though: spotting up. According to Synergy, Bowman shot 43.3 percent (65 eFG%) and scored 1.31 points per possession on catch-and-shoots (No. 6 in the ACC, minimum 50 possessions) last season.

By drawing extra defensive attention and/or creating  out of the pick-and-roll, Robinson created a lot of those juicy looks for Bowman.

Bowman already handled the ball plenty for Boston College, but he will be asked to do even more in 2018-19. Fortunately for BC, Bowman can be an absolute dynamo with the ball. He will need to improve his overall efficiency, but Bowman scored 168 total points out of the pick-and-roll last season, per Synergy, which ranked third in the ACC.

With increased usage, the 6-foot-1 Bowman has serious All-ACC potential in 2019. (Bowman was named Honorable Mention All-ACC in 2018.)

Elsewhere on the roster

Jordan Chatman is one of the ACC’s top three-point snipers: 87-of-220 (39.5 3P%) last season. He does the vast majority of his work off the catch, though: nearly 97 percent of the three-balls he hit last season were assisted on.

Can Chatman shoulder a larger playmaking role? With Robinson and Bowman around, he wasn’t asked to handle the ball all that much last season — evidenced by his assist (1.7 per 40 minutes) and turnover (7% TO rate) numbers.

It’s an option, but perhaps not one BC is totally comfortable with relying on.

The Eagles do, however, add a strong two-man recruiting class to next season’s roster: 4-star forward Jairus Hamilton, another North Carolina product like Robinson and Bowman, and 3-star guard Wynston Tabbs.

Tabbs is the less heralded recruit, but the 6-foot-2 prospect already has ball-screen skills and handles on offense. If he’s ready to shoulder some of the load early on, that will allow Bowman to float off the ball some, too, which frees up another potent shooter for Boston College.

Up front, Steffon Mitchell and Nik Popovic are big, active bodies that play hard and know how to screen. Both present intriguing dive/roll-man potential in a partnership with Bowman.

What the return of Torin Dorn means for NC State basketball