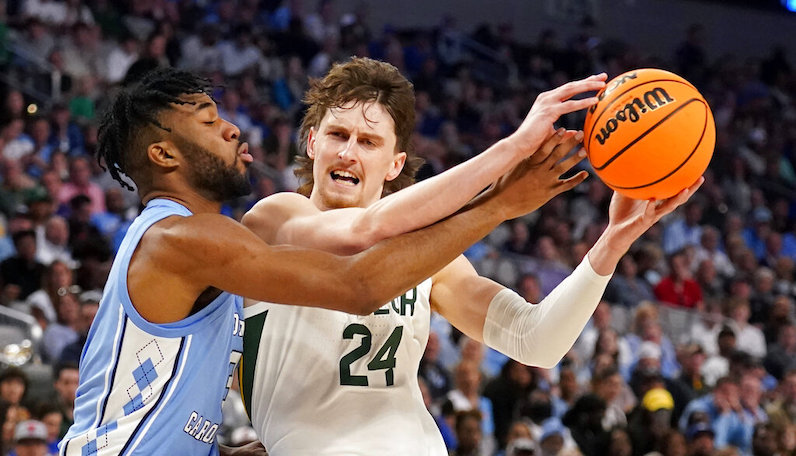 North Carolina guard Dontrez Styles, left, defends as Baylor guard Matthew Mayer (24) works to the basket in the second half of a second-round game in the NCAA college basketball tournament in Fort Worth, Texas, Saturday, March, 19, 2022. (AP Photo/Tony Gutierrez)

With rising-junior wing Kerwin Walton in the transfer portal, North Carolina basketball has one open scholarship for the 2021-22 season. There are a lot of ways for Hubert Davis to utilize this roster-building tool. However, with the departure of stretch-4 Brady Manek and Walton, another talented shooter, it stands to reason that Davis will look to add offense. That doesn’t have to necessarily be the case, though.

UNC could look to take a BPA (Best Player Available) approach or satisfy another team need. However, it seems prudent to add another shooter.

For the next few days, we’ll cycle through some transfer prospects UNC could look/hope to target — starting with Matthew Mayer of Baylor.

Early Monday morning, news broke: Baylor forward Matthew Mayer is in the transfer portal. Mayer is reportedly set on remaining in the 2022 NBA Draft, according to ESPN’s Jonathan Givony. If Mayer returns to college basketball, though, and leaves Waco, then the fit is perfect with UNC.

News: Baylor's Matthew Mayer, NCAA champion in 2021, entered the transfer portal prior to the deadline. Mayer's focus is on preparing for the NBA Draft and his full intent is to put himself in a position to stay in the 2022 NBA Draft. pic.twitter.com/Dig39queHi

In fact, here’s Mayer hitting a pull-up 3 vs. Manek that season — from the second side of Baylor’s Chin pick-and-roll set.

Mayer joined the starting lineup this season for the Bears; he averaged a career-best 9.8 points per per game. Despite playing more, Mayer’s usage rate actually dropped — from 24.8 percent in the 2020-21 season to 21.1 percent this season.

Mayer’s pull-up shooting numbers weren’t great this season (36.8 eFG%), but he has a smooth stroke and a high release point. Given Manek’s success as a movement shooter in North Carolina’s sets, plus Manek’s ability to partner with the interior gravity of Armando Bacot, and it’s all too easy to see Mayer putting up career numbers with the Tar Heels. Mayer isn’t nearly the pick-and-pop/movement shooter than Manek is, but his shooting profile is still rather appealing.

Another bit of offensive upset for Mayer: he’s a good cutter. Mayer doesn’t remain stagnant when off the ball; he continue to move and cut from the slot or corner, looking for rim finishes. According to Synergy Sports, Mayer shot 70 percent on basket cuts this season.

Overall, Mayer shot 64 percent at the rim this season.

On the other side of the floor, Mayer uses his size and athleticism to be a blocks and steals guy for Baylor, an elite defensive program.

Mayer finished his career at Baylor with a 2.7 percent block rate and 3.3 percent steal rate.

Going back to the 2007-08 season, only 19 high-major players have appeared in 100+ games, shot 33.0 3P% and finished with 2.5 percent block rate and 2.5 percent steal rate. This list includes Mayer, along with current NBA players: Draymond Green, Mikal Bridges, Matisse Thybulle and Tauren Prince.

During his three seasons with the Wildcats, the 6-foot-7 Brooks improved each season. After a tough freshman year, Brooks emerged as one of the top rebounders in the SEC his sophomore season (2020-21): 12.2 percent offensive rebound rate, 20.3 percent defensive rebound rate.

Here’s a Box Set Rip alley-oop play from Kentucky, which Brooks finishes with a dunk, while JT Thor and Sharife Cooper get caught in the off-ball action.

Brooks played some of his best ball as a junior, though, averaging 10.8 points (49.1 FG%) and 4.4 rebounds (1.5 offensive) per game. From Kentucky’s Weave Get pick-and-roll action: here’s Brooks finishing with a slam behind Dawson Garcia, off a find via TyTy Washington.

With a 7-foot-1 wingspan, Brooks is an impactful finisher around the cup. Brooks shots 70.2 percent on rim attempts this season, including 30 dunks, tied for 2nd most on Kentucky’s roster.

The biggest knock on Brooks offensively is the lack of a 3-point jumper. Brooks is far more comfortable shooting off the catch from the midrange; for his career, Brooks is just 18-of-77 from beyond the arc (23.4 3P%).

This aspect of his game could make for a tough fit next to Bacot and Leaky Black, two other (mostly) non-shooters, although Black’s jumper has shown modest improvements. Brooks has some shooting touch, too; it just doesn’t extend out to the arc. As a junior, Brooks shot just under 40 percent on long 2s and 78.3 percent from the line.

Update: Efton Reid has since committed to Gonzaga.

Back in May of 2021, Efton Reid, then a 5-star prospect, committed to LSU over several ACC programs, including Virginia, Pittsburgh, Louisville, Florida State and, of course, UNC. One year later, the 7-foot Reid is again being courted by plenty of programs.

There’s an obvious connection for Reid and North Carolina: Armando Bacot. Reid hails from Richmond (Va.), just like Bacot. During his final year of prep ball (2020-21), Reid played at the IMG Academy, where he averaged 16 points and 11 rebounds per game, just like Bacot.

To start his freshman year, Reid came out of the gate strong. He showcased an old school post game — strong lower body, strength on his backdowns and touch with either hand. This stretch included 14 points (7-of-9 2PA) in a win over Wake Forest.

Reid isn’t a super explosive finisher (19 dunks); his game takes place below the rim. However, when he applies his strength and touch, Reid can score in the point.

On this possession vs. Ohio, Reid isolates on the block, spins away from the double and then pivots back to the middle for a hook shot.

Reid shot 66.2 percent around the rim and 73.3 percent on basket cuts, per Synergy

Look at this gorgeous find from Tari Eason.

LSU finished the season No. 6 nationally in adjusted defensive efficiency, according to KenPom. Part of that approach was an aggressive switch scheme — one that occasionally put Reid in tough spots, like having to guard Michael Devoe 1-on-1 in space.

Reid would be an interesting player for UNC to add, hypothetically. For starters, he wouldn’t be able to play with Bacot. Reid doesn’t offer enough stretch (5-of-20 3PA) or passing (4.8 percent assist rate) to assuage any spacing concerns on offense. Defensively, both of those guys need to be in the paint in terms of pick-and-roll coverages. Plus, Reid doesn’t have the foot speed or conditioning (yet) to guard in space for large stretches.

Attentively, if UNC could sell Reid on a reserve role, then it’s a different story. Under this notion, North Carolina could pitch Reid the idea of playing a set number of minutes behind Bacot, while making some NIL money and forming a potent platoon at the pivot.

Following the season, assuming Bacot moves to the NBA, then Reid could slide in and man the 5 for the 2023-24 season, with GG Jackson as his frontcourt running mate.