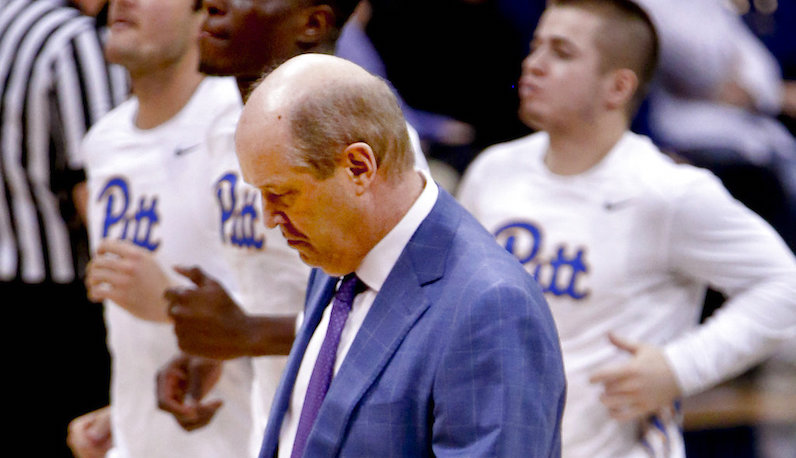 Pittsburgh head coach Kevin Stallings, center, walks off the court in front of his team after the first half of an NCAA college basketball game against Virginia, Saturday, Feb. 24, 2018, in Pittsburgh. Pitt was trailing 30-7, making only one field goal in the half. Virginia won the game, 66-37. (AP Photo/Keith Srakocic)

The loss dropped Kevin Stalling and Pitt to 0-18 in league play; the Panthers are now the second ACC team to go winless in conference games since expanding to 18 games. Yes, the 2015-16 Boston College Eagles have company in the cellar. Make sure to grab some snacks before descending the stairs.

This season has had ripple effects around the program, too. Morale is low; the job status of Kevin Stallings is a frequent topic of conversation. For example: According to Cardiac Hill, Pitt averaged the lowest home attendance since 1982.

Now that we have arrived here — perfect imperfection — how do the 2018 Pitt Panthers compare with the 2016 Boston College Eagles?

A Snapshot: Pitt Basketball vs. BC

It’s sort of interesting to see how these two teams stack up, right? Pitt basketball, thanks to the contributions of Parker Stewart (maybe he can become Pitt’s Jerome Robinson) and Jared Wilson-Frame, gets the edge on the offensive side of the floor. The Panthers have a higher offensive rating, effective shooting rating and slightly outpaced the Eagles in efficiency in the half-court against man-to-man defense, per Synergy Sports.

Despite allowing a higher opponent effective field goal percentage, the 2016 BC Eagles, were a little bit better on the defensive side of the floor. Boston College had a better defensive rating — both in and out of conference play. The Eagles were also slightly better in terms of transition defense, which is another key measure.

Efficiency margin is just one metric, but Boston College also has a slightly better showing here, too.

Is this Pitt team the worst in the ACC since expansion?