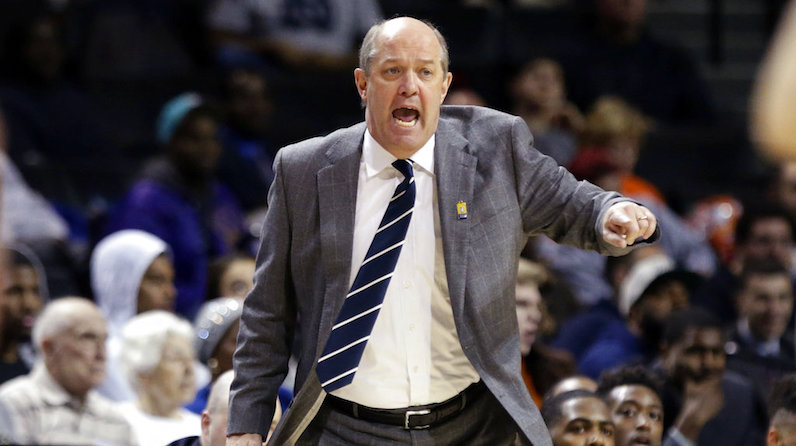 Pittsburgh head coach Kevin Stallings calls out to his team during the first half of an NCAA college basketball game against Notre Dame in the first round of the Atlantic Coast Conference tournament Tuesday, March 6, 2018, in New York. (AP Photo/Frank Franklin II)

It’s been a rough basketball season in Pittsburgh for the Panthers. Pitt became just the second ACC team to slump to 0-18 in conference play. The last time Pitt got a win came way back on December 22 — over Towson.

In an opening round ACC Tournament game against Notre Dame, Pitt fought hard, and even outscored the Irish in the second half, 40-31, but lost 67-64. Emotions boiled over a little towards the end of the game, too, as head coach Kevin Stalling tried to snap a clipboard prior to drawing up an end-of-game play.

Kevin Stallings tries to break his clipboard and when he's unsuccessful he realizes he actually needs to draw something up 😂 pic.twitter.com/syCxvDKCWK

It’s never wise to lose one’s cool, but it may be hard to blame Kevin Stallings too much here. This was an emotional game at the end of a very long season. This program was desperate for a win, and the Panthers had a great opportunity to pick one up against a talented Notre Dame squad. However, they fell a little short.

The obvious topic of conversation after the game: the job status of Kevin Stallings for next season. It’s been only two seasons for Stallings at Pitt, but in that time, the Panthers are just 24-41.

To his credit, Stallings answered multiple questions after the loss about his employment. Stallings claimed to have little concern over his employment, because that decision is out of his hands.

Asked if he will need to sell his employers again on his vision for Pitt basketball, Stalling responded.

Kevin Stallings, when asked if he believes he will have to sell his bosses on his vision in order to return next season: "I think they know what my vision is; I think that's been communicated."

BC’s Ky Bowman dominates in the pick-and-roll, will look to keep it going vs. NC State