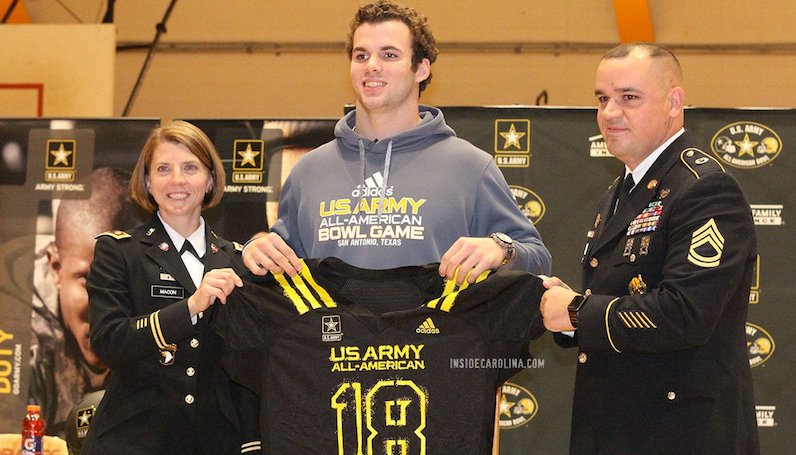 According to a report from Joe Giglio of the News & Observer, star recruit and incoming NC State freshman linebacker Payton Wilson has re-injured his right knee. Wilson, the No. 79 prospect in the nation, will more than likely be forced to sit and redshirt during the 2018 season.

Last October, Wilson tore his right ACL, which forced him to miss the rest of his senior season. Prior to the injury, Wilson racked up 103 tackles in Orange High School’s first eight games.

Wilson, who initially committed to UNC in May 2017, decommitted from the Tar Heels last November. A month later, he committed to NC State. Wilson’s commitment to NCSU came less than a week after the Wolfpack defeated the Heels 33-21 in Raleigh. Next: a month after that, in January 2018, Wilson enrolled at NC State.

Initially, the 6-foot-4 Wilson was expected to compete with Germaine Pratt for one of the outside linebacker spot. That, however, will like no longer be the case. (Pratt recorded 69 total tackles, including 5.5 for loss, in 2017.) Sophomore Louis Acceus, who collected four tackles in 2017, is in the mix, too.

Wilson was the highest-rated player in NC State’s top-25 2018 recruiting class, according to 247 Sports.

As Giglio notes in his story: due to a new NCAA rule, Wilson could play in four games and not lose a year of eligibility. Currently, there’s no certainty on when Wilson will be ready/healthy enough to play, though.

The timing of the Roy Robertson hire is strategic