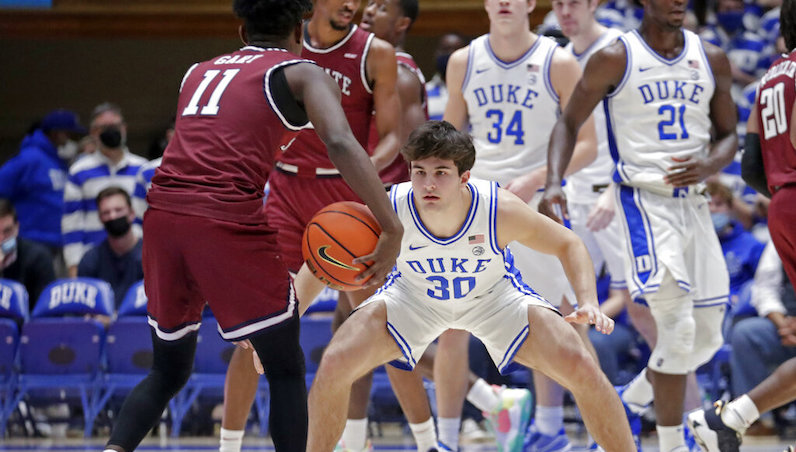 According to a report from Adam Row at The Devils Den, Michael Savarino will transfer out of the Duke basketball program. Savarino is the grandson of Mike Krzyzewski.

Savarino just wrapped up his third season with Duke; it was his first on scholarship, after spending his first two seasons as a walk-on.

The departure of Savarino frees up a scholarship for Jon Scheyer and Duke, which could be used on a transfer player. Currently, the Blue Devils have four scholarships available for the 2022-23 season.

Savarino appeared in 13 games during his Duke career, including 11 this season. Savarino scored 12 points this season, connecting on 4-of-9 3-point attempts.

However, Savarino’s most notable moment this season came back in November. Outside of Durham, Savarino and star forward Paolo Banchero were pulled over one night by police. Savarino was charged with Driving While Impaired.

No public punishment was announced, but Savarino spent close to a month away from the team before returning in mid-December.

Earlier this week, Duke center Mark Williams declared for the 2022 NBA Draft. Williams projects as a First Round selection. Several other NBA Draft decisions are on the horizon for the Blue Devils, though. Paolo Banchero, a Top 3 projected pick, will obviously declare and head to the NBA. Wendell Moore Jr. seems likely to go, too. However, there’s more intrigue around the decision of Trevor Keels.