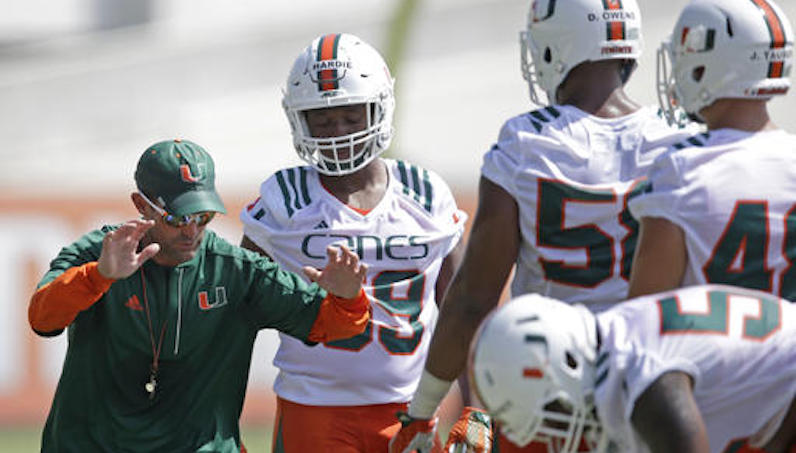 According to multiple media reports, Temple is in the process of finalizing a deal to name Miami defensive coordinator Manny Diaz (2016-18) as its next head coach. The deal for Diaz will be finalized on Thursday at 3 p.m. The deal between Temple and Diaz is set for five years.

Source: Temple is finalizing a deal to make Miami DC Manny Diaz the next head coach.

Diaz is in his third season as defensive coordinator for the Hurricanes; during his time with the program, Miami has excelled on the defensive side of the ball. Respected as one of the best coordinators in the country, Diaz helped guided a power defense for three seasons. In 2018, Miami ranked 15th in the FBS in scoring defense (18.2 points per game) and first in tackles for loss (10.5 per game). According to Football Study Hall, Miami’s defense also ranked inside the top 10 nationally in Success Rate and Marginal Efficiency.

Manny Diaz will be introduced as the new #Temple head coach Thursday afternoon… big loss for #Miami. He had a huge impact at #UM in his three seasons there.

Prior to this stint, Diaz was well-traveled as an assistant coach. He’s been a grad assistant at Florida State — his alma mater. Diaz also spent six seasons (2000-05) as an assistant coach at NC State. After that, he ran the defense at Middle Tennessee State for four seasons (2006-09), before jumping to Mississippi State. Mack Brown hired Diaz to his staff at Texas in 2011; he coordinated the Longhorns on defense for three seasons.

A look at the performance of QB N’Kosi Perry