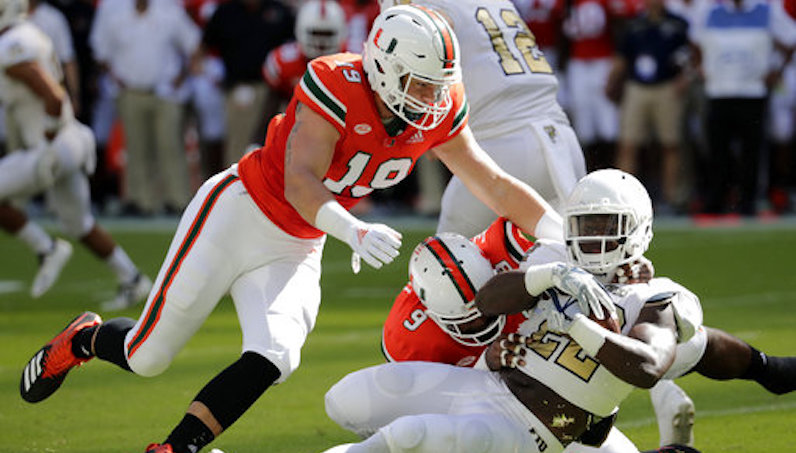 There was one player in Miami’s season-opening defeat against LSU that really stood out on defense for the Hurricanes: Gerald Willis III. In his first game since the 2016 season, Willis finished with four tackles for loss and a sack. Since then, he’s yet to slow down.

Willis currently leads the FBS with 10 tackles for loss, including three more against both Toledo and Florida International. The 6-foot-4, 300-pound senior from New Orleans picked up his second sack of the season against Toledo.

Gerald Willis is a breakout star of the 2018 season!

According to Football Study Hall, Willis has 11 run stuff this season — tackles at or behind the line of scrimmage.

Next to Willis, his teammate Jonathan Garvin — a former 4-star recruit — ranks second in the ACC with 8.5 tackles for loss. Willis and Garvin have combined for 18.5 tackles for loss, which is more than three ACC teams: NC State (16 in three games), Louisville (15) and Georgia Tech (13).

For the season, Miami’s defensive line ranks first in the FBS in Havoc Rate; the front four of the Hurricanes have recorded a tackle for loss, forced a fumble, or defensed a pass on 13.7 percent of the plays its faced, per Football Study Hall. That’s a jump over the defensive line’s 8.8 percent Havoc Rate in 2017, which ranked No. 4 in the FBS.

In total, Miami’s 2018 defense ranks No. 1 nationally in Havoc Rate: 20.9 percent. Considering the amount of talent that left the program for the NFL after the 2017 season, this is rather impressive.

All of this could spell problems on Thursday night for a North Carolina offensive line that ranks 92nd in the FBS with an Opportunity Rate of only 43.2 percent.