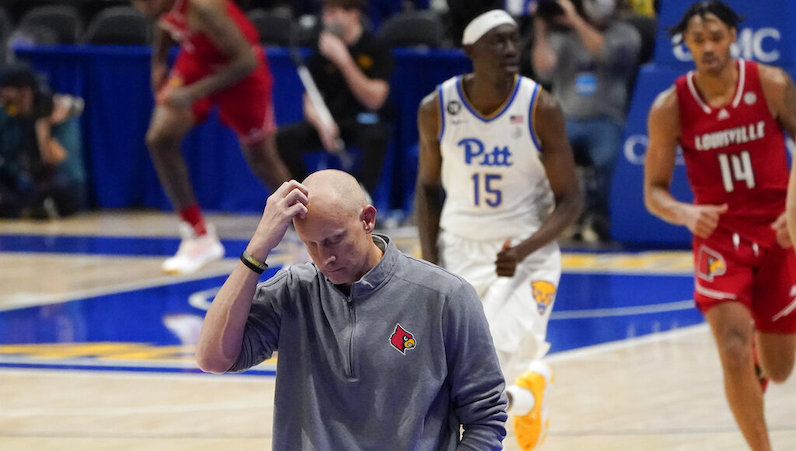 Louisville head coach Chris Mack, bottom, scratches his head as his team brings the ball upcourt during the second half of an NCAA college basketball game against Pittsburgh, Saturday, Jan. 15, 2022, in Pittsburgh. (AP Photo/Keith Srakocic)

Things aren’t going so well for Chris Mack and Louisville basketball. Following a tumultuous offseason, Louisville sought to reset the agenda this season; however, things may be unraveling even further.

The Cards started 4-0 in ACC play, but Mack’s club has dropped four of its last five games. This stretch was punctuated with a 12-point loss on Saturday to Notre Dame, 82-70. Star guard Blake Wesley pumped in 22 points; the Irish drained 15 3-pointers. It was Louisville’s worst defensive performance of the season: 1.33 points per possession.

After the game, center Malik Williams — a fifth-year senior and one of the team’s captains — was asked by the media if he thought the team was tuning out the coaching staff. A visibly-frustrated Williams waited nearly 10 seconds before responding: “I don’t have a comment for that.”

Of course, Mack also missed the first six games of this season, while serving a suspension. Mack was suspended (without pay) by the university for a failure to follow university guidelines in dealing with the extortion attempt of former assistant coach Dino Gaudio.

With Mack out, the Cards went 5-1 and won the 2021 Bahamas Championship. Assistant coach Mike Pegues served as the acting head coach.