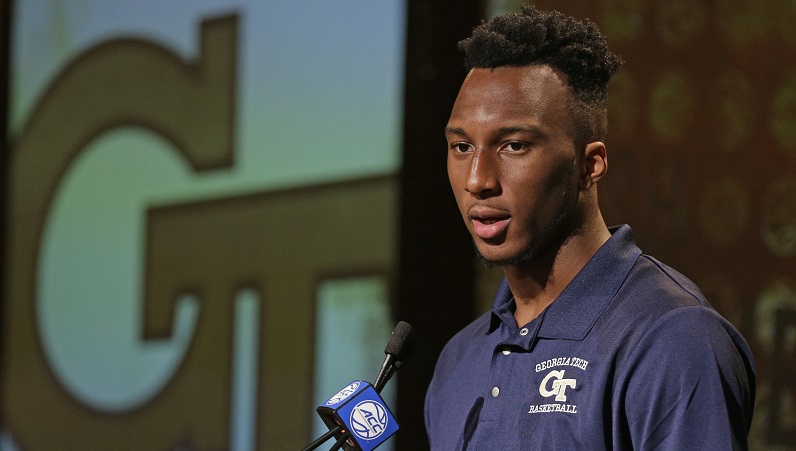 It was only a matter of time after his breakout performance at the combine (42 inch max vertical leap), but it’s official now. Georgia Tech’s Josh Okogie will forgo his final two years in college and remain in the NBA Draft. Okogie made the announcement on Twitter; shortly after, Georgia Tech posted something on the school’s athletics website.

Over two seasons in Atlanta, Okogie averaged nearly 17 points per game. He’s one of six Yellow Jackets to record over 1,000 career points before the end of his sophomore season. Georgia Tech struggled in 2017-18 — for a variety of reasons. However, the year prior, GT made it all the way to the NIT finals — behind a top-10 defense, and the funky two-man game of Josh Okogie and Ben Lammers.

As a draft prospect, reviews are still a bit mixed on Okogie. He’s been viewed as a fringe first round pick; some mocks still have him going in the second round, though. Although after this performance in Chicago — when Okogie flashed some skills and defensive versatility — one would think his stock will climb.

It’s not a matter of will Okogie be drafted — but when, and will he be able to land one of the coveted guaranteed contracts that comes with a first round selection.

Next Season for GT: Yikes

With Josh Okogie joining Ben Lammers and Tadric Jackson (both seniors) in heading out the door, Tech will lose serious firepower. According to KenPom, Georgia Tech ranked 197th nationally in adjusted offensive efficiency. That group will now have to replace three of its top four scorers; Okogie also doubled as the team’s creator when rookie point guard Jose Alvarado was lost for the season with an elbow injury.

Okogie, Jackson and Lammers also finished one, two and three, respectively, in terms of usage rate on Tech’s roster — amongst players with at least 500 minutes of action.

(Plus, without Lammers and Okogie, Tech’s defense, which has been excellent the last two seasons, will likely backslide, too.)

Coach Josh Pastner will add three freshmen scholarship players to next season’s roster; Georgia Tech’s 2018 recruiting class ranks No. 41 nationally, per 247 Sports. One of those commitments, 4-star guard Michael Devoe, a top-50 prospect, will likely be tasked with caring a heavy load early in his career. Much more will be needed from Alvarado, too.

Regardless, it will be a serious chore for Georgia Tech to score the basketball in Pastner’s third season in Atlanta. Tech hasn’t made it to the NCAA Tournament since Derrick Favors led the 2010 team to the Big Dance. On paper, this is not a team that projects to postseason success. Could this spell additional trouble for Pastner?

Stock Report: How Grayson Allen, Gary Trent and Trevon Duval stood out at the NBA Combine