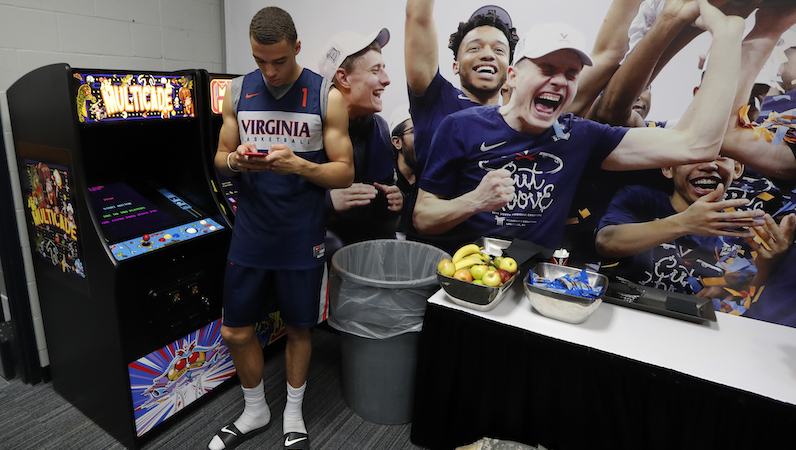 Virginia's Francesco Badocchi texts during a news conference in the locker room for the championship of the Final Four NCAA college basketball tournament, Sunday, April 7, 2019, in Minneapolis. Virginia will play Texas Tech on Monday for the national championship. (AP Photo/Charlie Neibergall)

The 6-foot-7 Badocchi will forever be a member of Virginia’s 2019 title team; during the season, he scored five points in only 28 minutes of action.

#UVa announces Francesco Badocchi is leaving the program for “personal reasons” but will remain enrolled at the university. https://t.co/GHfIcHR2TM

After not finding much playing time in Virginia’s crowded frontcourt last season, Badocchi was expected to have a larger role this season. That, however, is no longer the case. (Considering how good Virginia’s staff is at player development, though, Badocchi could’ve been an interesting player to keep an eye on this season.)

Initially a 3-star recruit in the 2017 class, Badocchi was viewed as more of a project player; hence why he redshirted during the 2017-18 season. Just before the start of the 2018-19 season, Badocchi took a leave of absence from the program — for undisclosed medical reasons. He later returned during the season.

Virginia still has plenty of depth in the frontcourt, though. With Mamadi Diakite back, there are plenty of lineup combinations for UVA to access — along with stretch 5 Jay Huff and the ubiquitous Braxton Key.

Behind those returning veterans, Virginia also has 7-foot redshirt freshman Francisco Caffaro, and two incoming freshmen — Kadin Shedrick and Justin McKoy, both prospects from the state of North Carolina. After the 2019-20 season, Virginia will have season of eligibility remaining for Marquette transfer Sam Hauser.