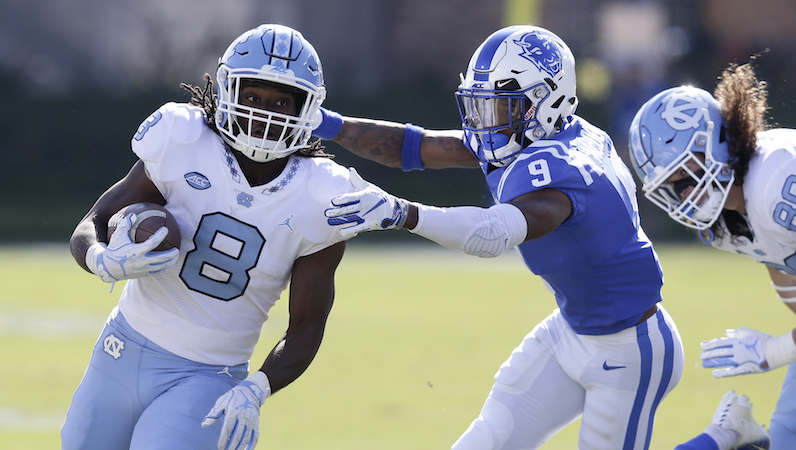 North Carolina’s dynamic offense is about part ways with two of its most productive playmakers. Running back Michael Carter and wide receiver Dyami Brown both announced that they won’t return for the 2021 season at UNC. Carter will also sit out the team’s Orange Bowl matchup with Texas A&M.

Carter will finish his career with 3,404 rushing yards and 22 rushing touchdowns. During his four years at UNC, Carter 4,060 yards from scrimmage. However, Carter’s career took off with the arrival of Mack Brown, Phil Longo and Sam Howell. As a senior in 2020, Carter 1,245 yards (8.0 yards per carry), tops in the ACC, and nine touchdowns. While sharing time with Javonte Williams, Carter averaged 151.6 all-purpose yards for game (No. 2 in the ACC).

Michael Carter and Dyami Brown both announce that they won't return next season for UNC and will enter the NFL draft. Carter will not play in the Orange Bowl. #UNC

Starting in the 2019 season, Brown emerged as one of the top deep threats in college football. Brown was one of just four FBS receivers in 2019 to finish with 1,000 receiving yards, 10 touchdowns and average at least 20 yards per catch. Two of the other players to hit those benchmarks: Oklahoma’s CeeDee Lamb and Ja’Marr Chase of LSU.

During the 2020 campaign, though, Brown continued to take steps further: 55 catches for 1,099 yards (No. 1 in the ACC) and eight touchdowns.