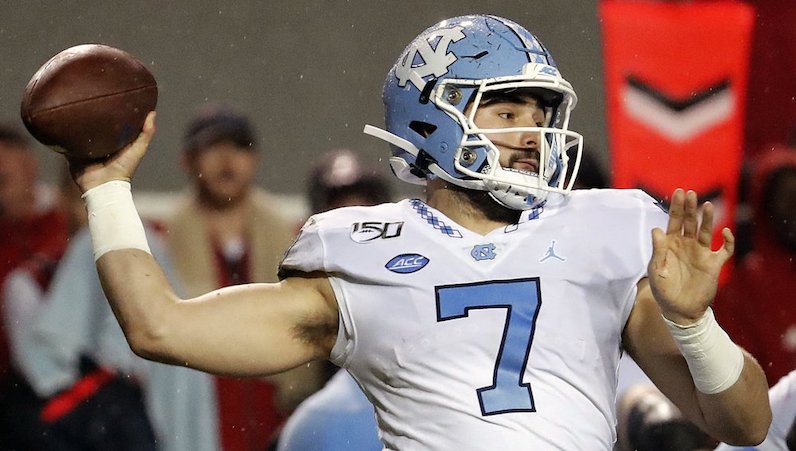 Sam Howell has added more new ink to the North Carolina football record book. It’s no surprise that this year’s UNC-Wake Forest game turned into a shootout. Trailing by 21 with under seven minutes left in the third quarter, the Tar Heels reeled off 35 unanswered points to win 59-53.

North Carolina and Wake Forest combined for 1,352 yards of total offense and 112 points. However, the day belonged to Howell, who went 32-of-45 through the air for 550 yards and 6 touchdowns.

During the second half, Howell became the first UNC quarterback to throw for over 500 yards in a single game. The previous program record came back in 2015, when Marquise Williams threw for 494 yards against Duke.

Howell: most TD resp for in program history

Later, when Howell hooked up with tight end Garrett Walston for 10-yard score in the fourth quarter, the sophomore became the first quarterback in program history to throw for 6 touchdown passes in a single game, too.

Back in 2016, Clemson’s Deshaun Watson set an ACC record with 580 passing yards against Pittsburgh.

.@Sam7Howell is the only Carolina quarterback to ever throw for 500 yards in a single game. #CarolinaFootball 🏈 #BeTheOne pic.twitter.com/6lk5Z1FK2O

Howell also ran for a touchdown, which gave UNC the lead with 4:11 left to play in the fourth quarter.

Howell is the first FBS quarterback since 2017 with 500+ passing yards, 6+ touchdown passes and 1+ rushing touchdown in the same game. Going back to the 2000 season, only four other players have hit those benchmarks.

550 passing yds is the most Wake has ever allowed.
746 total offense is the third-most ever Wake has allowed.

No Beau Corrales, Storm Duck for UNC vs. Wake Forest