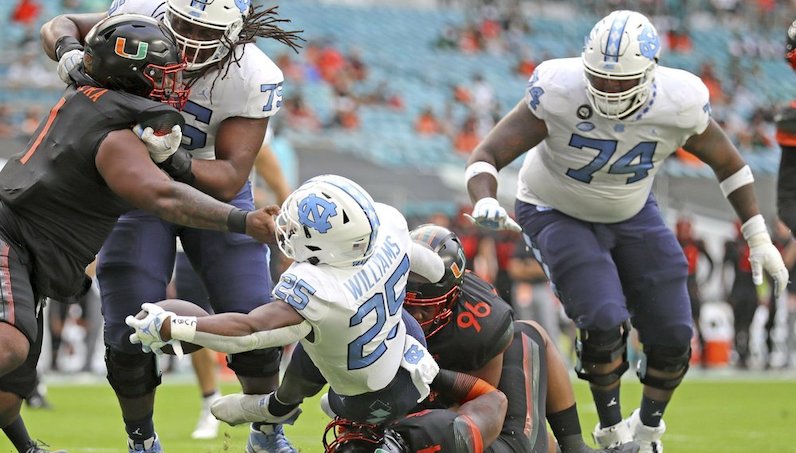 Miami defensive lineman Jonathan Ford (96) fails to stop North Carolina running back Javonte Williams (25) as he scores a touchdown during the first half of an during an NCAA college football game at Hard Rock Stadium In Miami Gardens, Fla, Saturday, Dec, 12, 2020. (Al Diaz/Miami Herald via AP)

With the regular season all but closed out, let’s take a look at our final 2020 ACC Football Power Rankings — as we get set for Saturday’s conference title matchup.

In the week leading up to Notre Dame’s rematch with Clemson, defensive coordinator Clark Lea agreed to become the next head coach at Vanderbilt. According to reports, Lea will finish out the season with Notre Dame, though.

SOURCES: #NotreDame DC Clark Lea has been offered the job to become the next head coach at #Vandy, where he was once a player. He was the Commodores top target all along. Right now, it’s his to turn down.https://t.co/6x58T36u8c

Clemson opened as a big 10-point favorite for this Saturday’s conference title matchup with Notre Dame. For the first time since 2018, let’s see what Trevor Lawrence can do against the Irish.

So, um, North Carolina did mean things to Miami last Saturday. Led once more by the dynamic duo of Michael Carter and Javonte Williams, UNC hung 62 points on the Hurricanes — to go along with 778 total yards, including 554 on the ground.

Michael Carter (308) and Javonte Williams (236) finished with the most rushing yards by teammates in a game in FBS history (544).

UNC finished with 778 total yards, it's the most yards Miami has allowed in a game in school history. pic.twitter.com/95rP21GX9G

With the cancellation of the Georgia Tech game, UNC’s demolition of Miami will be the final regular season game for the Hurricanes.

So far this season in the ACC: 17 different players have recorded 400+ receiving yards and 5+ receiving touchdowns; this list includes Cary Angeline, Emeka Emeize and Thayer Thomas from NC State. The Wolfpack are one of two teams (along with BC) to have a trio of players clear those benchmarks.

Kudos to the leadership over at Boston College, which became the first ACC football program to opt out of the 2020 bowl season. Pitt and Virginia followed, too.

Boston College will not play in bowl this year. “The players are emotionally spent,” BC AD Pat Kraft told @Stadium. “They haven’t seen family since June. This season was hard for them. We met after practice. Proud of them to be honest with ourselves.”

The end of the 2020 season for Pitt marks the conclusion of Patrick Jones in a Panthers uniform. It’s been quite a run for Jones: 17.5 sacks combined the last two seasons. Jones is a top prospect at the defensive end position for the 2021 NFL Draft.

After going winless in the month of November, Wake Forest is now 0-1 in December — following last weekend’s loss at Louisville. The Demon Deacons have the chance to close the season with a winning record, though.

After weeks of near free fall, Virginia Tech hit the brakes. The Hokies returned the Commonwealth Cup to Blacksburg, thanks to 162 rushing yards from Khalil Herbert in a 33-15 win over UVA.

Virginia lost a lot of talent from its 2019 division title team, including star quarterback Bryce Perkins. Yet, this UVA program showed that it has the ability to sustain. There’s a standard now in Charlottesville. Even in a challenging year, Bronco Mendenhall can build a strong defense and win games by just doing the little things right.

The final regular season game of the 2020 season served as a bit of a coming out party for redshirt freshman running back Jalen Mitchell. During the win over Wake Forest, Mitchell ran for 168 yards on 20 carries (8.4 yards per carry).

Turning a career day in to ACC Rookie of the Week honors!

Geoff Collins of Georgia Tech had somewhere to be 😂

Florida State is a basketball school.

Good news: the 35 points Duke scored against FSU were the second best mark in a conference game this season.

Bad news: the 35 points Duke scored against FSU were the second best mark in a conference game this season. Also, the Blue Devils lost by 21 points in a mostly pointless game.