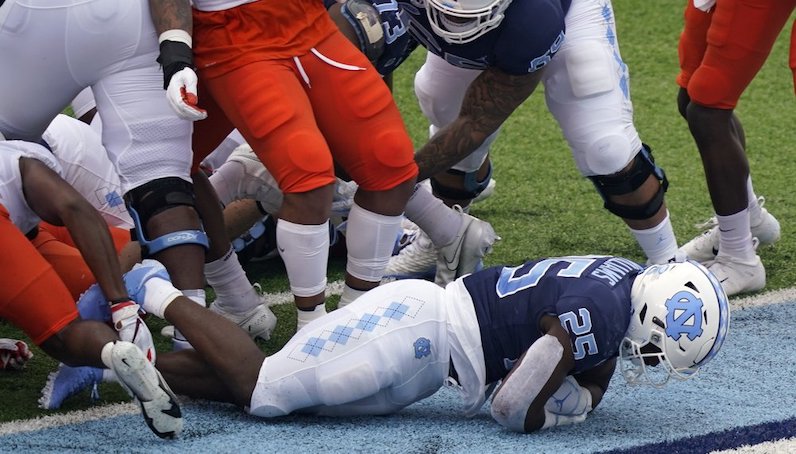 Expectations were set high coming into this season for Javonte Williams and Michael Carter. There were plenty of reasons to buy stock in North Carolina’s offense; the skill talent surrounding Sam Howell was undeniably good. While the Tar Heels have experienced some hiccups en route to de factor midpoint of the 2020 season, UNC’s dynamic duo has certainly lived up to its lofty preseason hype — plus some.

Going back to the 2000 season, 40 different ACC players have rushed for 1,100+ yards in a single season. Of that group, four were quarterbacks that attempted at least 100 passes in the same season. (That Lamar Jackson fellow is pretty great at football.) But no two teammates have eclipsed the 1,110-yard benchmark individually in the same season.

That’s a pretty crude and arbitrary number to shoot for: 1,100 yards. However, it’s a possibly for Williams and Carter to both hit in 2020, as they continue to emerge as one of the best backfield duos in the entire country.

Javonte Williams already has 10 rushing touchdowns on the season, second in the FBS to only Najee Harris of Alabama. Williams is a nice blend of goal-line efficiency and big-play potential. The junior back leads the ACC in all-purpose plays — runs and receptions — of 10+ yards with 32. (Carter ranks third in the league with 25; Travis Etienne slots in at No. 2.)

Given their abilities to both run and catch, Williams and Carter are an evolved two-headed monster — one with, like, eight limbs moving in different directions.

Around the end zone, though, Williams turns into a short-yardage powerhouse; nine of his 10 rushing touchdowns have from come inside the opponent 20-yard line, including five 1-yard rushing scores.

Williams could become the first UNC back since Elijah Hood in 2015 to rush for 1,110 yards and 10 touchdowns, while averaging at least six yards per carry.

If your team isn’t ready to tackle that afternoon, Williams and Carter (both excellent in RPO actions) will put them on notice — ask NC State. The Wolfpack allowed 326 rushing yards in last week’s matchup: 5.9 yards per carry and five touchdowns. According to Pro Football Focus, Williams forced 17 missed tackles on runs against NC State, which has been just the norm this season.

In fact, Williams has morphed into somewhat of an advanced numbers darling. (To be clear, that process started last season.)

That effort against the Wolfpack came just two weeks after the Tar Heels bulldozed Virginia Tech, too: 399 rushing yards, 9.3 yards per carry and five rushing touchdowns. Carter and Williams combined for 453 all-purpose yards — of UNC’s 656 total yards — on 41 touches: over 11 yards per touch.

Tracking back to the 2000 season, UNC has just four total games of 300+ rushing yards and five or more touchdowns. With Carter and Williams leading the way, three of those performances have come over the last two years, including two in the month of Oct. 2020.

They’re not done yet, either; North Carolina gets set for Virginia this Saturday. After seven straight wins (2010-16) over Virginia, North Carolina has now lost three straight to Bronco Mendenhall. However, at only 1-4, Virginia will be desperate for a victory, too.

So far, the Cavs rank 41st nationally in defensive efficiency, per ESPN. However, the ‘Hoos have faired worse in pass defense; opponents have averaged 286 passing yards per game and 8.9 yards per pass attempt, both of which rank dead last in the ACC. Conversely, Virginia’s defense has allowed just 3.3 yards per carry.

This could spell trouble for a defense tasked with stopping Sam Howell, but that could mean seeing Carter and Williams shift into dangerous receivers out of the backfield. Regardless, those two will feature heavily into whatever offensive mix Phil Longo cooks up.

WR Beau Corrales to be evaluated the week of UVA game