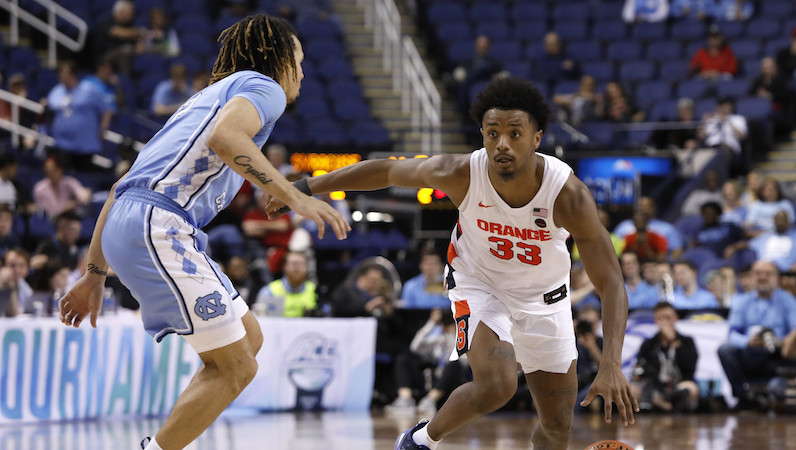 One of the most improved players in the ACC is set to leave college basketball: Elijah Hughes has declared for the 2020 NBA Draft.

An All-ACC performer during the 2019-20 season, Hughes averaged 19 points, 4.9 rebounds, 3.4 assists and 1.2 steals per game. As the usage and play-making duties of Hughes increased — with his assist rate doubling to 20.1 percent — so, too, did his efficiency. Hughes improved both his BPM and true shooting percentages this season.

the love is real, it’s genuine.

Hughes was one of only five players in the ACC to finish with a usage rate above 25 percent (a personal increase of five percent) and an assist rate north of 20 percent. According to Synergy Sports, Hughes attempted 120 off-dribble field goals (43.8 eFG%) in the half court; that checked in as the fifth highest total in the ACC. It’s also a massive spike from a season ago (56 FGA).

Hughes, who transferred to Syracuse in 2017 from East Carolina, recently turned 22; he will be 23 at the time of the 2021 NBA Draft, which likely played a role in his decision-making process.

The Orange have one of the better combo guards in the 2020 class set to arrive, though: Kadary Richmond, a 4-star prospect. Richmond, a top-100 prospect, can help matters — by adding depth. Clearly, a lot will fall on the shoulders on Buddy Boeheim and Joe Girard.