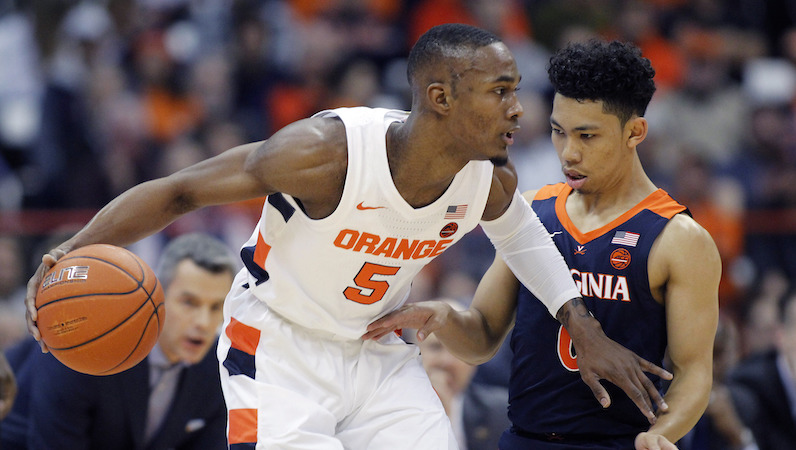 Syracuse may have its backcourt of the future with Joe Girard and Buddy Boeheim; however, the program will be out two other guards. Sophomore Jalen Carey and Howard Washington have entered the NCAA transfer portal.

Carey, a former top-60 recruit in the 2018 class, never quite got off the ground at Syracuse. As a freshman, Carey played just 304 minutes while dealing with massive turnover issues — 5.4 turnovers per 40 minutes. During the 2019-20 season, Carey appeared in just two games, making two starts. However, he suffered a thumb injury in November that required surgery. Carey never returned to the court for the Orange.

Washington, on the other hand, is a redshirt sophomore; last week he was awared the ACC’s Bob Bradley Spirit and Courage Award at the ACC Tournament. After suffering a stroke in the fall of 2018, Washington needed surgery to remove two blood clots from remove. Washington also required surgery to repair a hole in his heart, too, which was the cause of the stroke.

In total, Washington played in 41 career games at Syracuse (268 minutes).

Another high-profile recruit, Brycen Goodine, has also decided to transfer out of Syracuse. After scoring 44 points across 23 games (200 total minutes), Goodine has committed to play at Providence. Goodine, a top-100 prospect in the 2019 class, initially chose to play at Syracuse over Boston College.

Can Carey shake turnover troubles as a sophomore?