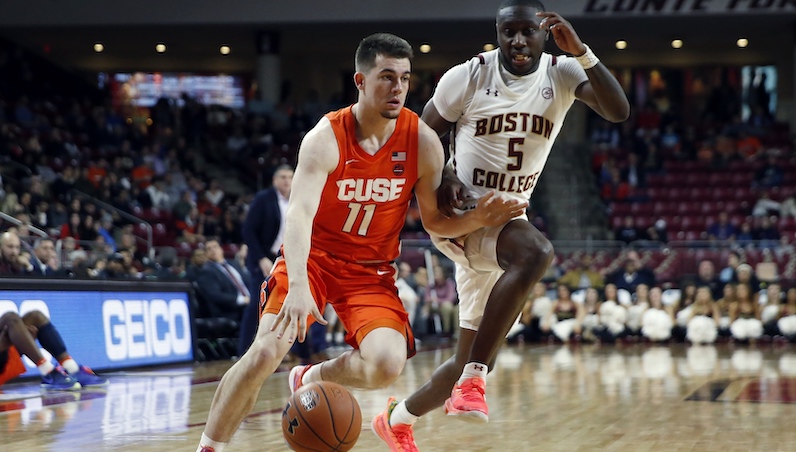 In recent years, Syracuse coach Jim Boeheim has tightened his rotation. In seven of the last eight seasons, going back to the 2012-13 campaign, Syracuse has ranked outside the top 300 nationally in bench minutes.

According to KenPom, bench players combined for only 18 percent of Syracuse’s combined minutes (No. 349 in Division I) this season. In both the 2015-16 and 2017-18 seasons, Syracuse’s bench accounted for less than 16 percent of the team’s minutes. (The 2017-18 team featured three players that averaged at least 38 minutes of playing time per game: Tyus Battle, Oshae Brissett and Frank Howard.)

With the constant churn of roster turnover in college basketball, there are downstream impacts from playing such a limited rotation. These decisions could prove costly, too. Quickly after Syracuse’s season concluded, three guards elected to enter the NCAA transfer portal: Jalen Carey, Brycen Goodine and Howard Washington.

Syracuse played 32 games before the 2019-20 season was cut short due to concerns with the COVID-19 virus. This season’s roster featured only six players that appeared in all 32 games; of that group, four guys — Buddy Boeheim, Elijah Hughes, Marek Dolezaj and Bourama Sidibe — started all 32 games, too.

The other two players in Syracuse’s de facto six-man rotation — talented freshmen Joe Girard and Quincy Guerrier — both played over 650 minutes this season. Girard finished the season fourth on Syracuse’s roster in minutes: 1,057 (33 minutes per game).

Carey dealt with a serious wrist injury that cost him months of the season (a broken nose in January kept Goodine out of some games as well); however, that trio combined for less than 400 minutes of playing time this season. Carey and Goodine, both underclassmen, are former top-100 recruits.

Goodine explained to the Providence Journal: “I enjoyed my time at Syracuse and appreciate the coaches, but I just didn’t play and I want to play. They understand.”

As the season progressed, Syracuse found a way to craft a top-25 offense around three primary guards: Hughes, Girard and Boeheim. That’s not easy, but those three struck a nice balance and found some synergy.

After functioning as a spot-up weapon last year, Hughes emerged as the offense’s alpha; the All-ACC talent was one of only five players in the conference to finish with a usage rate above 25 percent (a personal increase of five percent) and an assist rate north of 20 percent.

According to Synergy Sports, Hughes attempted 120 off-dribble field goals (43.8 eFG%) in the half court; that checked in as the fifth highest total in the ACC. It’s also a massive spike from a season ago (56 FGA).

Not to be outdone: Girard (21.3 percent usage) ranked sixth in the conference in off-dribble field goal attempts (118 FGA), while Boeheim (20.8 percent usage) topped the charts with 135 off-dribble attempts. (Girard has the makings of the next offensive engine for Syracuse — a play-making guard that can create his own shot. He’s going to be really good and score a lot of points.)

This season, only 15 ACC players recorded at least 1,000 minutes of action while posting a usage rate of at least 20 percent. Of that group, three are from Syracuse: Hughes, Girard and Boeheim. Syracuse and Pittsburgh are the only two programs with three players on the list.

The point being: the offense was clearly centered around this trio. That may have been out of necessity, but it could also be costly.

With the decisions of Carey, Goodine and Washington to enter the portal, Syracuse has some holes to role in the backcourt, especially if Hughes departs for the professional ranks. That looms as a very real possibility; keep in mind that Hughes, a redshirt junior, recently turned 22 and will be 23 at the time of the 2021 NBA Draft.

As of right now, there’s a great deal of uncertainty, however. The NBA, as is the rest of the world, is working to deal with life amid coronavirus. Complications with the global pandemic cancelled the rest of the college hoops seasons; the NBA is currently on halt. (The G League is expected to cancel the rest of its 2019-20 season, per ESPN.)

CDC recommendation of no events of 50-plus people for next two months comes as a number of NBA owners and executives increasingly believe a best case scenario is a mid-to-late June return to play — with no fans. League's scouting for possible arena dates all the way thru August.

So far, the league hasn’t announced publicly what its schedule will look like when (or if) it resumes play, although concepts have been floated. Very little has been announced about what the timeline for the draft could look like; most of the focus centers on finishing up the 2019-20 regular season, which was in its homestretch.

It seems likely to assume that deadlines for early entry candidates will be pushed back — along with the combine, other pre-draft events and the actual draft. (How this will all corresponded with the end of the league’s fiscal year remains up in the air as well.)

Interesting when you lay it out:

Mid-June- start of the NBA playoffs

For now, that makes things a bit of a mystery for a fringy prospect like Hughes, who at the least should throw his name into the pool and conduct workouts with teams. If Hughes chooses to return, then a lot of this concern goes out the window.

Let’s say Hughes decides to not only throw his name into the draft — whenever that should occur — but he also plans to remain in the draft and not return for his final season of college ball. If that happens, it’s no puzzle as to who will lead Syracuse’s offense next season. Girard and Boeheim will stay busy working the engine room for the offense.

Dolezaj had a solid junior season (70.8 FG% at the rim); he emerged as a productive pick-and-roll partner for the guards, especially on empty-side looks. However, Dolezaj is limited in terms of plus-impact. He doesn’t rectify potential backcourt issues.

Fortunately for Syracuse, the Orange have one of the top combo guards in the 2020 class set to arrive: Kadary Richmond, a 4-star prospect and a top-100 recruit. This could certainly help matters. However, if Richmond isn’t ready to roll from the jump, the coaching staff could look to ramp up usage of Girard and Boeheim even further.