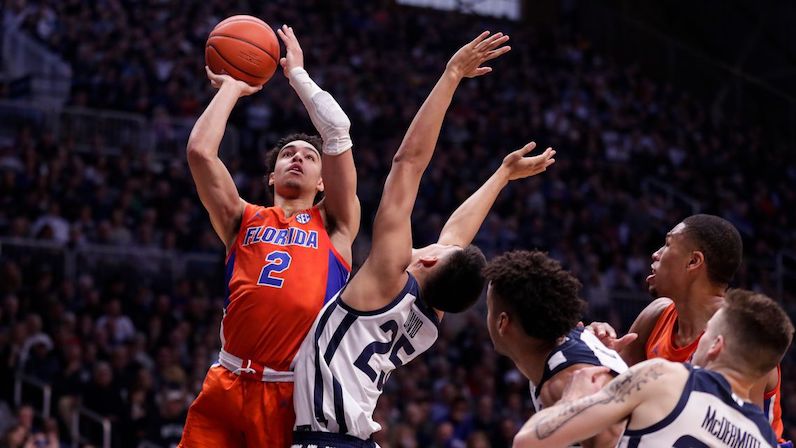 Andrew Nembhard could be on the move to Tobacco Road. After initially looking to test the 2020 NBA Draft waters, the sophomore point guard elected to enter the NCAA transfer portal.

According to Jeff Borzello of ESPN, several powerhouse programs have already contacted Nembhard, who officially landed in the portal Monday morning. That list of schools includes Duke. (Nembhard mentioned that the uncertainty in this year’s draft process, due to COVID-19, played a role in his decision.)

During his two seasons with the Gators, Nembhard started all 67 games. Over that stretch, he averaged 9.5 points and 5.5 assist per game. As a sophomore, Nembhard struggled some from beyond the arc (30.8 3P%); however, he managed to score 11.2 points per game while his true shooting (52.8 TS%) and effective shooting (49.5 eFG%) rose, slightly.

Nembhard has two seasons of eligibility remaining. Barring a waiver, Nembhard will sit out and redshirt during the 2020-21 season.

While on the floor this season, Nembhard assisted on 33.1 percent of his teammates’ field goals — 6.7 assists per 40 minutes.

After reclassifying from 2019 to the 2018 class, Nembhard finished his prep career at Montverde Academy (Florida). While he was at Montverde, Nembhard played, of course, with former Duke star and current New York Knick RJ Barrett. Nembhard and Barrett, who both hail from Canada, led Montverde to a 35-0 record during the 2017-18 season.

Florida entered the 2019-20 season with sizable expectations. With a top-10 recruiting class, led Scottie Lewis and Tre Mann, both 5-star recruits, and former Virginia Tech center Kerry Blackshear Jr., the Gators had lots of talent joining Nembhard. (Lewis and Mann will both return to Gainesville for their sophomore seasons.) The sum of the parts never quite added up, though: Florida won 19 games and finished 32nd in KenPom’s adjusted efficiency margin. Despite some up-and-down play, Nembhard still put up numbers.

Nembhard is a shot-creator that does most of his work out of the pick-and-roll. The 6-foot-5 Nembhard shot 64.7 percent around the basket this season — with over 92 percent of those field goals coming unassisted. That’s a big jump from his freshman season: 55.3 percent at the rim. Further from the hoop, Nembhard shot 42 percent on longer 2 (98 percent unassisted).

When Nembhard pass out of the pick-and-roll to a teammate the finished the possession (299 possessions), Florida scored 0.96 points per possession. This translated to 286 total points, per Synergy, 14th most nationally.