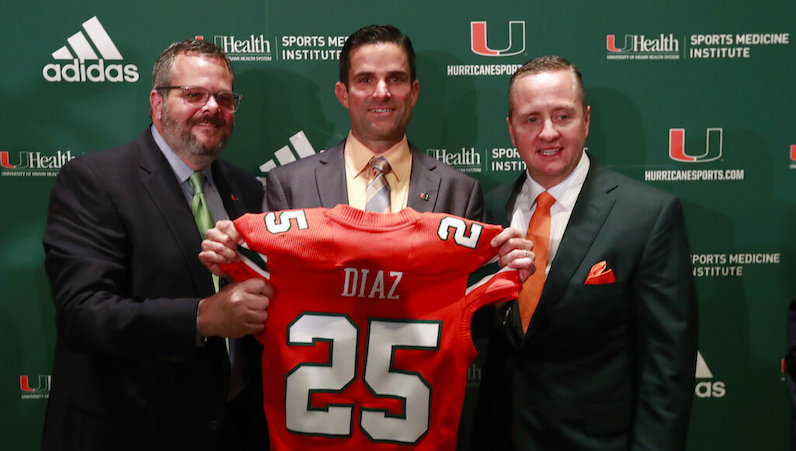 After nearly a decade with the University of Miami, athletic director Blake James is out. James and Miami agreed to mutually part ways.

Time are not good in the Miami athletic department, currently. In fact, things have been trending in this direction for some time now.

A few months back, school president Julio Frenk released a statement saying that he would take a more active role in handling Miami athletics.

Miami’s football program has slumped for decades. The 2021 season seemed like a possible get-right season for the program and third-year coach Manny Diaz. However, it’s all gone wrong for the Hurricanes, who lost in embarrassing fashion over the weekend to Florida State. For weeks now, rumors have surrounded Diaz: will he make it to the 2022 season with Miami?

Diaz in 19-15 during his time as the head coach of Miami. James was part of the team that hired Diaz to replace Mark Richt in late 2018. Diaz, who had previously been Miami’s defensive coordinator (2016-18), had recently accepted the head coaching position at Temple. However, one month later, he elected to return to Miami.

The Hurricanes have had some good moments under Diaz. Unfortunately, things never really got going in the right direction. Now, as Miami looks to replace James, a strong fundraiser, they must consider what to do next atop the football program.

Some schools, like LSU and Virginia Tech, have already agreed to mutually part ways with their coach — during the season. This gives those programs a leg up on the search process, which must weigh on Miami, at least some. Justin Fuente is out at Virginia Tech; AD Whit Babcock can look to land the best available candidate, while working with some runway, too. (Apparently Wake Forest’s Dave Clawson is a candidate for that opportunity.)

Ironically, Miami and Virginia Tech play one another this weekend in football.