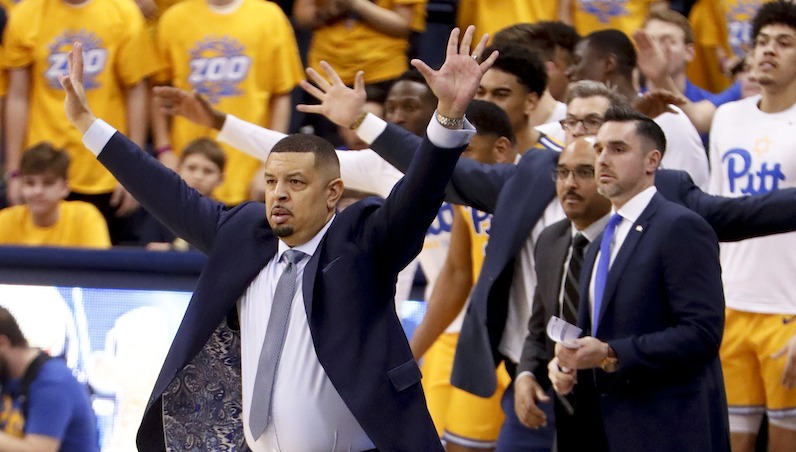 Pittsburgh head coach Jeff Capel, left, signals to his team as they play against Syracuse during the second half of an NCAA college basketball game, Saturday, Feb. 2, 2019, in Pittsburgh. Syracuse won 65-56. (AP Photo/Keith Srakocic)

Jeff Capel and Pittsburgh nabbed the program’s second 2020 commitment, another frontcourt prospect: Max Amadasun. Less than a month after Pitt received a pledge from 3-star power forward Noah Collier, Amadasun committed to the Panthers, too.

Amadasun — a 3-star prospect — hails from the Bronx; he also had offers from Penn State, Rhode Island and UMass — among others.

The 6-foot-10 Amadasun is a bit of a project offensively; however, he offers some versatility on defense and the ability to protect the rim. He posted strong shot-blocking numbers on the Nike EYBL circuit.

Amadasun will arrive on campus in what will be Terrell Brown’s senior season at Pitt. Brown, himself, is still a developmental project on the offensive side of the floor, but he’s made strides there. He’s known far better for his emerging defensive profile, though. Last season, Brown blocked 1.8 shots per game — 3.8 block per 40 minutes, which is a monster number.

The 2020-21 season could afford Amadasun the opportunity to learn from one of the ACC’s top rim protectors, and then, perhaps, run with the torch after that.

For whatever it’s worth, too: Pitt has previous success with prospects from The Bronx. Two backcourt stalwarts of the previous decade — Ronald Ramon and Carl Krauser — both hailed from The Bronx.

Media Day: Xavier Johnson on which point guard he models his game after