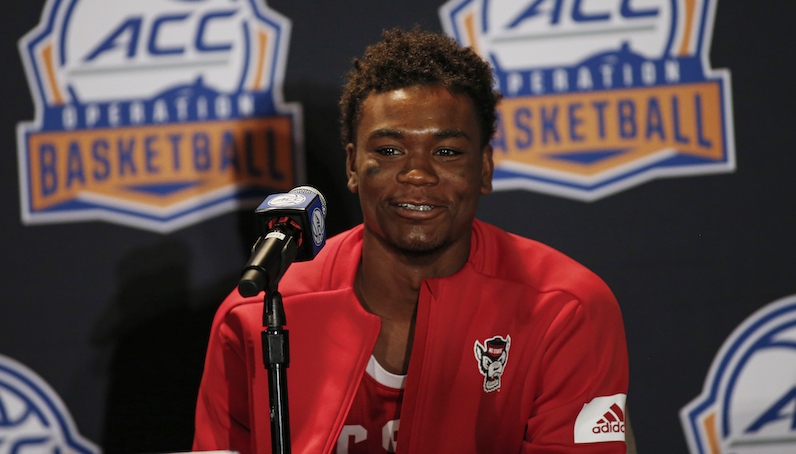 Charlotte — It’s the Year of the Point Guard in the ACC. Two of the conference’s best at the position — Markell Johnson and Xavier Johnson — double as two of the best pick-and-roll creators in college hoops, too.

At ACC media day, we asked Johnson and Johnson which point guard they model their pick-and-roll craft after. As it turns out, both of their selections are ACC Basketball alums, too.

Markell Johnson, as a sophomore, dished out 10.1 assists per 40 minutes; he ranked fifth nationally with a 40.5 percent assist rate, and State scored 311 points on 291 pick-and-roll possessions when Johnson was a passer, according to Synergy Sports. (1.07 points per possession, 55.4 eFG%) These are monster numbers.

During his junior year, though, Johnson tweaked his game. He remained a solid pick-and-roll decision-maker, showcasing his playmaking craft (6.7 assists per 40 minutes); however, Johnson took it up a notch as a volume scorer as well. Unsurprisingly, Johnson did a lot of his work out of the pick-and-roll: 46.5 percent shooting (55.1 eFG%).

Johnson has the ability to score from all three/four levels. “The next step for me is top make the right read coming off the pick-and-roll,” Johnson told ACCSports.com. “I want to be as poised as I can coming off the screens.”

When asked which point guard he studies the most — the one he looks to model his game after — Johnson picked one of the best: the Point God, Chris Paul, who played at Wake Forest (2003-05).

Xavier Johnson, on the other hand, took control of Pittsburgh’s offense as a freshman. Similar to Johnson, the name of the game is pick-and-roll creation.

The Panthers scored an additional 215 points on pick-and-roll possessions when Johnson was a passer, per Synergy. Johnson was an incredibly busy player during his rookie year, too: the only freshman in the country with a 30 percent usage rate and a 30 percent assist rate, according to Bart Torvik.

Johnson’s point going pick played his college ball for the same school as his head coach — Jeff Capel: Kyrie Irving. “Just the way he makes decisions, the type of player he is — that’s the same type of player I have to be, too.”