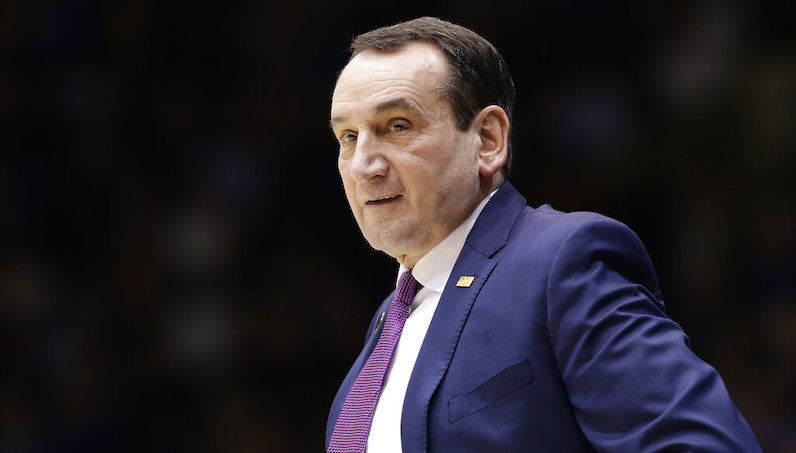 Duke's Coach K looks on during the first half of an NCAA college basketball game against Wake Forest in Durham, N.C., Tuesday, March 5, 2019. (AP Photo/Gerry Broome)

With Coach K in the midst of his final ACC schedule, we’re taking a look back on various historical moments of Mike Krzyzewski’s 42-year tenure at Duke. Depending on Duke’s scheduled opponent, we’ll revisit a couple signature events or highlights from the past.

Following an upset loss to Miami, Duke is set to travel west along I-40 to Winston-Salem for a Wednesday night showdown with Alondes Williams and Wake Forest. Sticking with the program, here are three notable Duke-Wake Forest moments from the last 20 years.

During the 2002-03 season, Wake Forest and Duke met for the first time on Jan. 12 in Durham; unsurprisingly, things went Duke’s way. Behind 16 points from Dahntay Jones and 14 points from Chris Duhon, the Blue Devils won with ease, 74-55.

That game also featured an incident between Jones and Wake Forest freshman guard Justin Gray, now the head coach of Western Carolina. As he tried to get around a screen set by Jones, Gray broke his jaw. For the next month, Gray would have his jaw wired shut for a month, sustaining himself on only milkshakes.

As fate would have it, though, Gray returned to the floor on Feb. 13 — when Wake Forest hosted No. 8 Duke at the LJVM Coliseum.

Josh Howard, who would later be unanimously named ACC Player of the Year (the first since David Thompson in 1975), played only 27 minutes, while dealing with foul trouble. Gray, who wore a protective mask in his return, had his vengeance, though: 18 points off the bench.

However, the hero of the night was freshman wing Trent Strickland. Pressed into duty, Strickland played 16 minutes and scored 12 points, including 10 in the second overtime period.

When Strickland left the floor that night, it was on the arms of Wake Forest students who stormed the floor following the win.

The victory was Wake Forest’s first win over Duke since 1997. It was also a signature moment for Prosser who, in his second year with the Deacs, took down a giant. The message was clear: “We’re here now.”

One year later, Wake Forest would again go on to defeat Duke in Winston-Salem: 94-80. Freshman forward Luol Deng led Duke with 20 points, but it wasn’t enough to top another star rookie: Chris Paul, who finished with 23 points (8-of-12 FGA), 8 assists and 4 steals.

That game was also possibly a career-worst performance for sophomore slingshot JJ Redick: 0-of-5 FGA, 2 points. However, beyond the box score, this matchup will be remembered for sparking one of the more fun mini-beefs along Tobacco Road: Duke’s JJ Redick vs. Chris Paul.

During the first half of the game, Redick and Paul got tangled up on an offensive possession for Duke. Redick pushed Paul, and what followed would be simmering rivalry that would last for nearly a decade, until the two teamed up on the Los Angeles Clippers.

Before that, though, when the two teams met the following season at Cameron Indoor Stadium, Coach K — following two straight defeats to Maryland and Virginia Tech — elected to start walk-on guard Patrick Davidson for a matchup with Paul.

Davidson was in the game to do one thing: get inside Paul’s head.

Ultimately, Duke would win that game 102-92. The Blue Devils would go on to claim another ACC title that season, too, powered by an elite defense and Redick’s shooting.

Later, Paul and Krzyzewski would join forces with Team USA Basketball, losing only one game together and winning two Olympic Gold Medals.

Duke’s final home game of the 2018-19 season was Wake Forest’s best chance to win in Cameron since Tim Duncan was wearing the Old Gold and Black.

In Duke’s penultimate game without Zion Williamson, who was injured two weeks prior vs. UNC, the Blue Devils received quite the scare.

This was a sluggish performance on offense for Duke. RJ Barrett led the way with 28 points and 4 assists; however, the southpaw star turned the ball over seven times and missed all six of his 3-point attempts.

On the other side of the floor, Chaundee Brown went for 21 points, while Brandon Childress pumped in 19.

In the waining seconds of the game, Duke led by three points — following a switch-hand after-timeout runner from Barrett. Wake Forest called a timeout after the bucket; Childress drove the length of the floor and scored on a layup with 7.4 seconds remaining, which pulled Wake Forest within one point, 71-70.

After the layup, Duke was in the process of getting ready to inbounds the ball when forward Jack White stepped across the end-line with the ball in his hands, which resulted in a turnover for the Blue Devils.

Wake Forest ran a baseline out-of-bounds play for Childress, guarded by Tre Jones. Childress came off a screen and a handoff, which Cam Reddish switched out on him, looking to shoot. A fadeaway jumper from Childress, over the lanky Reddish, hit the front of the rim and caromed right to Brown, who had a shot to win the game at the buzzer.

Brown’s attempt, however, lipped out, Duke won and then went on the win the 2019 ACC Tournament, with Zion back in full force.

Duke, Wake Forest both land in the top 5 of this week’s ACC Power Rankings