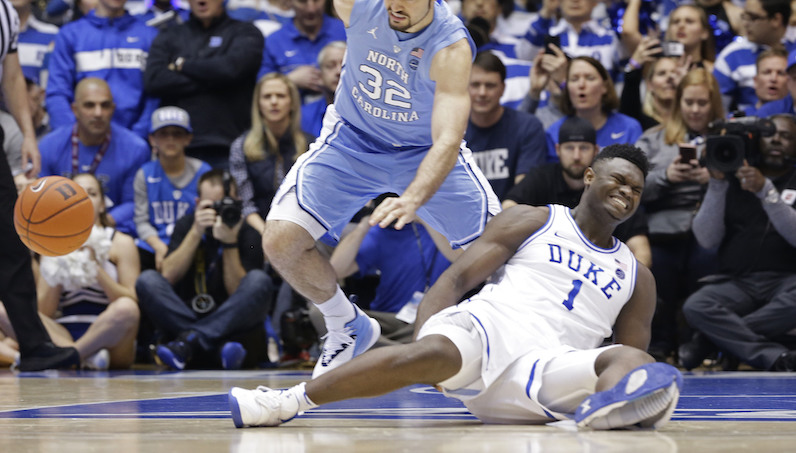 Duke's Zion Williamson (1) falls to the floor with an injury while chasing the ball with North Carolina's Luke Maye (32) during the first half of an NCAA college basketball game in Durham, N.C., Wednesday, Feb. 20, 2019. (AP Photo/Gerry Broome)

On Duke’s first possession of the game, Zion Williamson drove to the middle of the lane and tried to spin back. When that happened, though, Williamson’s left shoe ripped. He hit the ground in pain, instantly; something was clearly wrong. Less than a minute into the game, Duke’s star headed to the locker room. Away minutes later, it was announced that due to a knee injury he would not return.

“Let’s be honest, when the big fella goes out of the game it changes everything. I hated that part of it, huge fan of the kid.” — Roy Williams getting right to it regarding Zion Williamson

The Blue Devils were led on offense by Cam Reddish and R.J. Barrett, who combined for 60 of Duke’s 72 points. Barrett finished with 15 rebounds and four assists, too. He finished with a game-high 33 points; Reddish scored 27 and hit four 3-pointers.

(Note from Cameron: For a second, it was almost possible to forget that former United State President Barack Obama was in attendance, too. Also, it was very cool to have him here.)

“We were knocked back after that injury,” Duke coach Mike Krzyzewski said after the game, stating the obvious after Williamson exited. Krzyzewski addressed the injury, too: “It’s a mild knee sprain. The knee is stable. We don’t know how long he’ll be out.” More information should come out tomorrow.

Thanks for all the notifications and patience. #ZionWilliamson injury thoughts posted here. https://t.co/4cIdvpzbCY

Duke is back in action on Saturday at Syracuse, but the are far bigger concerns down the road for the Blue Devils, who must prepare for life without the best amateur basketball player in the world. As K noted: “We have to come up with a game plan based on Zion not playing.”

Zion Williamson plays above the rim, dominates everywhere for Duke