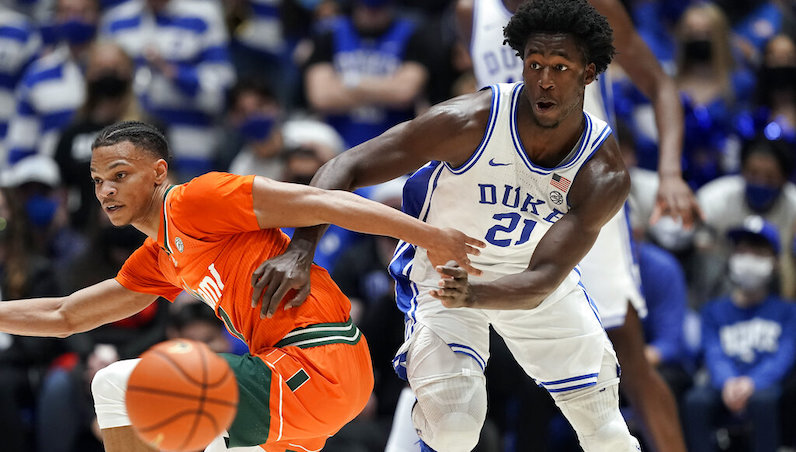 Following a wild Saturday of hoops in the league, let’s see where things stand in this week’s ACC Power Rankings.

The offense stayed afloat with rebounds and free throws; Duke grabbed 39.4 percent of its missed field goal attempts. However, the defense was a greater issue.

Isaiah Wong is awesome; he’s going to get his on offense. What can’t happen, though, is sloppy off-ball defense vs. Miami’s 5-out looks, which resulted in open looks at the rim. The Hurricanes lifted Duke’s defense and played into the open pockets of space around the basket. Jeremy Roach was routinely smoked backdoor.

Something of note, possibly: this type of offensive approach gave Duke’s defense issues earlier this season vs. inferior opponents, too. It’s on even more tape, now.

While Miami is driven on offense by Wong and Kameron McGusty, the Hurricanes pulled off the road upset in Durham on Saturday thanks to the play of veteran transfers Charlie Moore and Jordan Miller.

Moore finished with seven steals and threw in some wild shots, too, finishing with 18 points (6-of-9 2PA).

On the sneak, Jordan Miller has been an underrated addition to Miami this season: athletic stretch-4 (39 3P%) who can put the ball on the deck, helps space Miami's spread PnR looks around Isaiah Wong (1.11 PPP, 58 eFG%), and an impactful team defender that hits spots and disrupts

Miller continues to be one of the better role players in the ACC. He’s solid defensively, filling in gaps and guarding multiple position types.

On offense, he can make a play with the basketball, but he never does more than what’s asked. Miller does everything you’d want from a secondary target: spot up, hit open jumpers, crash the glass and avoid mistakes (12.3 TOV%).

What a difference a couple of days can make, huh?

During the mid-week game, UNC was carved up on the road at Notre Dame. The Irish got whatever they wanted from their continuity ball screen offense. That side-to-side screen-roll action pushed Hubert Davis to asking his bigs — Brady Manek and Armando Bacot — to switch on ball screens.

However, when North Carolina returned home, things looked much different vs. Virginia on Saturday.

Of course, Virginia doesn’t have the offensive personnel that Notre Dame presents, which is a key difference; UNC played more conservatively in pick-and-roll coverages. Bacot could play to the level or drop and still get back to the rim.

Overall, UNC scored 1.20 points per possession on offense, while draining 11-of-25 3-point attempts (44 3P%) and mauling Virginia at the rim with Bacot.

Bacot finished with 29 points and 21 rebounds. The junior big man shot 10-of-14 at the rim, including three dunks. UNC continues to get good looks off this Horns Chicago set — with Caleb Love in distribution mode.

Going back to the 2007-08 season, this is the second most efficient offensive output for UNC in a game vs. UVA. Back in Feb. 2013, North Carolina scored 1.34 points per possession and hit 13 3-pointers, including six from PJ Hairston, in a 93-81 win over Virginia.

As I wrote last week, the rim pressure El Ellis provides for Louisville’s half-court offense is critical. After a big performance vs. Pitt (18 points, 6-of-10 FGA), Ellis went for 14 points and three assists during the FSU loss.

Late in the first half, Ellis called for an end-of-possession clear-out and got around Anthony Polite — one of the top on-ball defenders in the country — for a close-range 2.

Ellis played 23 minutes. While he was on the floor, the Cards were +5 in a game the lost by nine points. Louisville also scored 1.21 points per possession when Ellis was in the game, according to Pivot Analysis.

That offensive efficiency number dropped to under 0.90 points per possession with Ellis on the bench.

During the two wins, Williams averaged 22.5 points and 4.0 assists per game, while shooting 10-of-17 at the rim and attempting 15 combined free throws.

This isn’t your mom or your dad’s Clemson team. Brad Brownell’s club continues to get it done on offense; the Tigers rank top 25 nationally in both 3-point percentage and effective shooting.

The main cog on that side of the floor is sophomore big man PJ Hall, who continues to put together a spectacular season.

Hall may not be Aamir Simms as a passer or a stretch shooting option; however, he can handle the ball and facilitate from the elbow with quick reads and handoff actions.

Hall has a nice hook shot, which he can finish with either hand. When catches closer to the rim, though, Hall can mash opponents with his strength: 68.5 percent shooting around the rim this season.

I love this play from Clemson: Veer pindown slip into a rip (back) screen for Hall.

It wasn’t pretty at times, but Notre Dame got it done with an overtime win: 72-68 above Georgia Tech.

Once again, freshman guard Blake Wesley was an awesome source of advantage creation on offense: 22 points, 8 FGA at the rim and 3 assists.

The pull-up shooting flashes with Wesley are super intriguing, too.

Caleb Mills is likely a little too fond of off-dribble midrange jumpers; however, the Houston transfer is having a pretty solid season on offense. As far as Florida State’s guards go, he’s the best breakdown player for Leonard Hamilton.

With Scottie Barnes and Raiquan Gray in the NBA now, FSU is working — on the fly — to up its half-court creation efforts. That’s not easy, but when Mills has the jumper rolling, things look different. Following a tough outing at Wake Forest, Mills responded vs. the Cards.

Louisville switches on the line with Noah Locke on this double drag pick-and-roll look from Florida State, but Mills gets into his bag for a herky-jerky fade jumper.

Florida State hit a lot of tough shots in this game, which is just gonna happen some games. Basketball is a make-or-miss game and there are talented players on the FSU roster, including freshman wing Matthew Cleveland.

Cleveland had the most efficient game of his young college career, too: 17 points (7-of-8 FGA) and zero turnovers.

This may not be a traditional Virginia defense, but Tony Bennett is getting exceptional defensive play from sophomore point guard Reece Beekman.

Beekman is one of eight high-major players with a 2.0 percent block rate and a 4.0 percent steal rate. He’s joined here by FSU’s RayQuan Evans and former NC State guard Shakeel Moore, now at Mississippi State, among others.

After two weeks off, Virginia Tech returned to the floor last week and struggled defensively. In fact, the loss to NC State marked the third time this season that the Hokies have allowed over 1.1 points per possession to an opposing offense: Wake Forest, Duke and NC State, all three defeats.

Last 6 games for Dereon Seabron: 6-13 3PA (15% 3PA rate), starting to shoot off the catch from deep with a little more comfort, needs space but doesn't necessarily have a slow/exaggerated release, even flashed some relo skils along the wing and corners

Syracuse defended better in the weekend game vs. Wake Forest — compared to the mid-week matchup with Miami — but the Orange are now 2-8 in games when they allow better than 1.0 points per possession.

According to Synergy Sports, Hugley 48.5 percent on post-up attempts this season; he’s scored a total of 113 post-up points this season, too, which is at top 10 number nationally and No. 1 in the ACC.

Boston College has been a good defensive rebounding team this season, so far. However, Pitt rebounded 35.7 percent of its missed attempts on Saturday, including six offensive boards from Hugley.

Dereon Seabron as the Option No. 1 for NC State