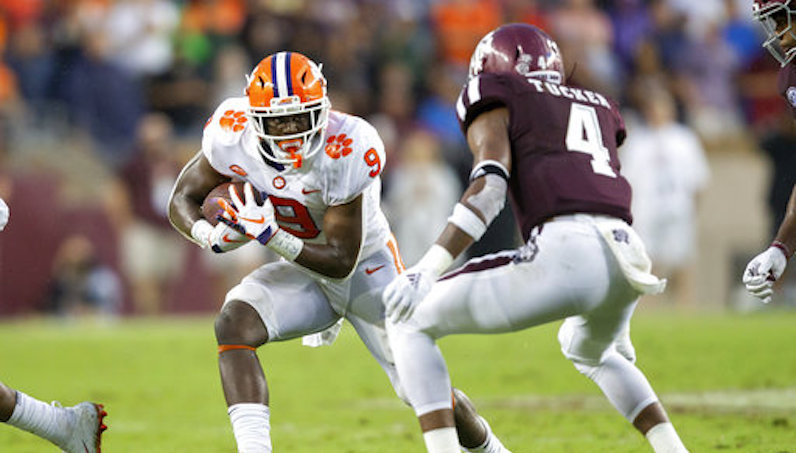 Clemson running back Travis Etienne (9) tries to avoid a tackle by Texas A&M defensive back Derrick Tucker (4) during the first half of an NCAA college football game Saturday, Sept. 8, 2018, in College Station, Texas. (AP Photo/Sam Craft)

After two weeks of action, here’s the latest AP Top 25 college football poll. This week’s poll features three ACC teams — the same as a week ago. As usual, Clemson leads the way.

Boston College is on the verge on entering the top 25, but may need a road win at Wake Forest on Thursday night — weather permitting — to secure that. Other ACC teams receiving votes:

In the road win at Texas A&M, Kelly Bryant became the first ACC quarterback since Lamar Jackson (Nov. 2017 vs. Kentucky) to complete 70 percent of his passes, and rush for at least 50 yards and a touchdown in a single game.

Ball State transfer Damon Hazelton Jr. continues to impress — after four catches for 107 yards and a touchdown in the win over William & Mary, the 6-foot-2 wideout has six catches on nine targets this season, including two touchdown grabs.

In a bit of a laugher, Miami hung 77 points on Savannah State — again; the Hurricanes have outscored the Tigers 154-7 the last two times they’ve faced off. According to Football Study Hall, Miami scored 6.36 points per scoring opportunity on Saturday.