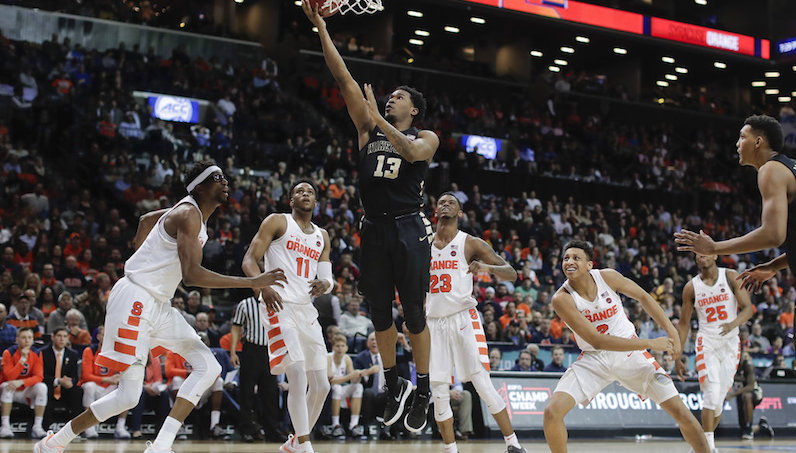 Five months ago, Wake Forest opened the basketball season with three straight losses. Since then, plenty of negative things have swirled around the program that call into question the future of the program.

At first glance, the announcement that Bryant Crawford and Doral Moore will explore the NBA Draft seems like just another one of those pieces of negative news. Especially coming so close after the decisions of Keyshawn Woods and Donovan Mitchell to leave the program.

However, this latest news isn’t as disastrous as it sounds … at least not yet.

As talented juniors, Crawford and Moore would be foolish not to take advantage of this opportunity. The decision also was both expected and encouraged by the program.

The players will get to work out for NBA teams starting on April 24 and will get feedback on their skills and their draft status. They also could earn an invite to the NBA combine. To return to the Deacons, the players cannot hire an agent and have until May 30 to remove their names from the draft.

Wake Forest also can definitely see benefits. Players who go through this process bring attention to the program, putting out the word that Wake Forest continues to produce NBA talent. In addition, players who get NBA-level feedback on their weaknesses can come back as more coachable the next season.

And let’s be clear: Both of these players should come back to Wake Forest next season. Neither is currently projected as being picked in the two-round draft, and only a combine miracle would likely change that.

Crawford has been an enigma during his Wake Forest career: clearly talented but very inconsistent. While he can do a little bit of everything, he’s not great at any one skill. Crawford can score, but he’s not a great shooter. He can facilitate, but he swung back to his turnover-prone self after cutting down on them last year. The final stroke against him is that he’s a weak defender.

But the biggest overall problem is that at his size (6-3), there are plenty of players with his skill set. Let’s take a look at players 6-3 or shorter in last year’s draft:

For Moore, he just completed the jump from being a player who averaged 7.7 minutes a game over his first two seasons to one who averaged 11.7 points and 10.9 rebounds in 28.1 minutes in ACC games last season.

At 7-foot-1, his size will be intriguing to NBA teams. But he doesn’t stand out in any area yet. He can’t dominate physically inside, and he’s not quick enough to guard on the perimeter. He also can’t bring any outside shooting yet. The biggest strike against him remains his conditioning. While he certainly was better this season, he clearly wore down after long stretches of play.

So if Crawford and Moore return to school, they’ll combine with a talented young group and give the Deacons a good chance to improve. But what if they don’t?

First, it would seem to be more of a statement about Manning and the program. Either move would be risky, meaning the player is choosing to leave a more secure situation where they can grow for one that offers no guarantees. That would continue the swirl of questions about the culture around the program.

On the court, Moore actually would be the biggest loss because the Deacons have almost no size. Olivier Sarr would be the only experienced scholarship big man, along with preferred walk-on Sunday Okeke and recruit Christian Lorng, who doesn’t project to make an immediate impact.

While Crawford’s talent would certainly be missed, the Deacons have plenty of guards and wing players. The biggest losses would likely be his outside shooting (especially considering the loss of Woods) and his experience.

Crawford also might be easier to replace with a graduate transfer, as guards are much more commonplace than big men.