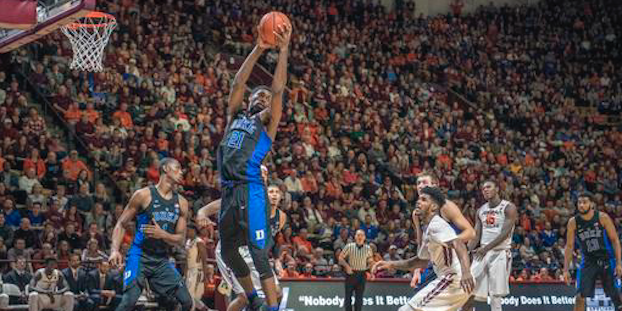 The Blue Devils went through this last season with mixed results — mostly bad. The 6-9 Jefferson was averaging a double-double when he fractured his foot in a December practice.

After playing in nine games, his senior season was over. Duke finished with a 25-11 record, its most losses in a season since 2006-07.

After getting a medical redshirt from the NCAA to play a fifth season for this year’s Blue Devils, Jefferson is again averaging a double-double with 13.1 points and 10.6 rebounds per game.

But, on Saturday while Duke was beating Boston College 93-82, he suffered a bone bruise in the same foot he broke last season. Jeff Capel, Duke’s acting head coach while Mike Krzyzewski recovers from back surgery, said Monday that Jefferson won’t play Tuesday night at Florida State and will be reevaluated on Wednesday.

Jefferson is the eighth Duke player to miss a game due to injury this season and, arguably, the most important.

“Amile is as important a player that we have,” Capel said. “His importance, his value cannot be measured by just numbers, and the numbers themselves are incredibly impressive. But the things that he does, coaches really value the things that he does. You see it a little different, the leadership, the talking, the experience. Being the most respected guy on the court and in the locker room.”

It’s a small sample size, but Duke wasn’t as good on defense in the second half against Boston College as it was in the first half.

The Eagles shot 46.4 percent, scoring 34 points over the first 20 minutes at Cameron last Saturday. With Jefferson not playing in the second half, Boston College shot 55.9 percent and scored 48 points in what Eagles coach Jim Christian called their best offensive half of the season.

With 6-10 freshman Harry Giles healthy and starting the last two games, Jefferson had moved to the power forward position in Duke’s starting lineup. Without him, Duke will…