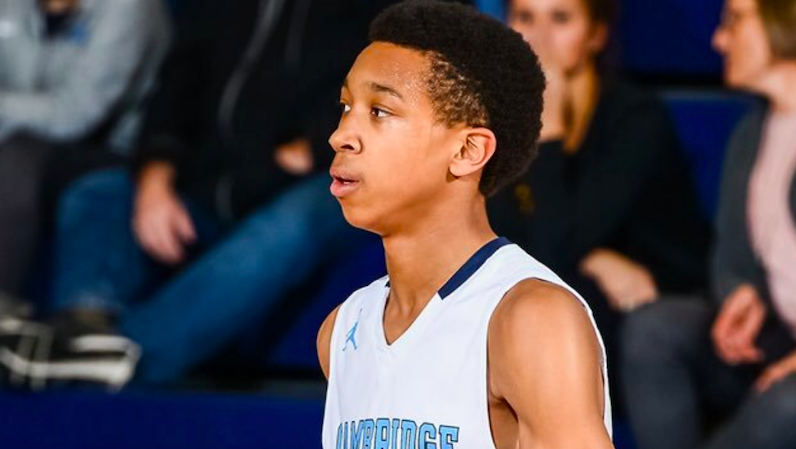 Matthew Cleveland, one of the top prospects in the 2021 recruiting class, looks to pass the ball (Photo: Twitter, @MCleveland35))

Matthew Cleveland, a 5-star shooting guard in the 2021 recruiting class, has committed to Florida State and Leonard Hamilton.

A little less than a month ago, Cleveland trimmed his list of programs down to five schools: Florida State, NC State, Kansas, Michigan and Stanford. In the end, however, Florida State won out. Assistant coach Charlton Young, who also helped land Devin Vassell and MJ Walker out of Georgia, played a key role in the addition.

Cleveland is a special athlete and one of the best slashers in all of prep basketball. 247 Sports slots the 6-foot-6, 190-pound Cleveland, who plays for Alpharetta (GA) Pace Academy, as the No. 2 shooting guard in the 2021 recruiting class. (Pace Academy is the same school that produced former Duke one-and-done star Wendell Carter Jr.)

While Hamilton success in Tallahassee goes back decades now, FSU has morphed into a special NBA pipeline, too. Going back to just 2016, FSU has lots of talent off to the NBA: Malik Beasley, Jonathan Isaac, Dwayne Bacon, Terance Mann and Mfiondu Kabengele. (Isaac will win at least one Defensive Player of the Year award at some point in his career.)

For 2020, Devin Vassell — another stud wing from Georgia — Patrick Williams and Trent Forrest all project as draft picks. Vassell and Williams are both near guarantees to land in the draft lottery, too. (In fact, those two could both easily end up as top 10 picks.) This has to appeal to Cleveland and Bryce McGowens, another 4-star 2021 wing that committed to FSU over Clemson in February.

Matthew Cleveland is top 5 in 2021 class to me right now. Kendall Brown is right outside top 5 also but need to see more. He is like a more wingy Obi Toppin (and obv not old)

This will also mark the third straight class that FSU has landed a top 25 prospect in: Patrick Williams (2019) and Scottie Barnes (2020).