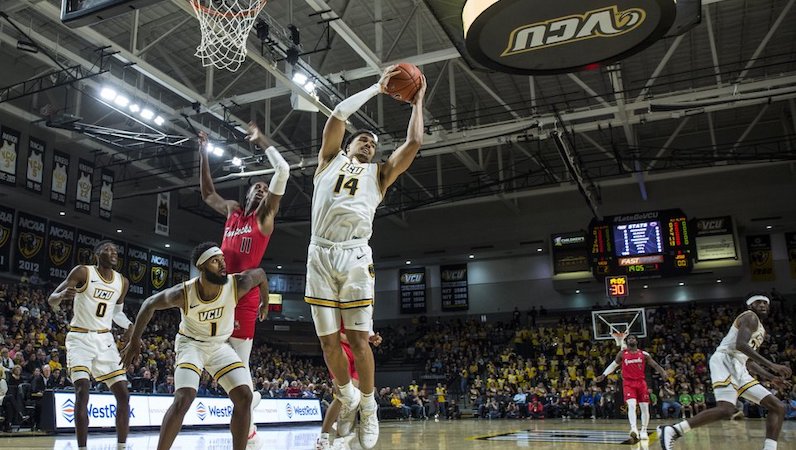 It didn’t take long for Marcus Santos-Silva to become an attractive target on the transfer market. The 6-foot-7, 250-pound Santos-Silva spent the last three seasons with VCU, two of them as a full-time starter. As a junior, Santos-Silva averaged 12.8 points, 8.9 rebounds, 1.3 blocks and 1.1 steals per game. Given his size, that’s a fairly diverse two-way impact.

A host of programs contacted Santos-Silva, including two from the ACC: Miami and Virginia Tech. (Earlier this month, he announced plans to test the 2020 NBA Draft waters.)

In 97 career games, Santos-Silva has 21 performances of 10 or more rebounds. That includes a 22-rebound performance against Rhode Island last season. (That total was tied for the third most in a Division I game during the 2018-19 season.)

This year, Santos-Silva shot 64 percent at the rim — with a healthy volume of attempts (205 FGA) — including 20 dunks. Santos-Silva has never attempted a 3-pointer in a college game.

The Hurricanes have a fairly congested frontcourt, led by Cincinnati transfer Nysier Brooks (eligibile this season). Miami has plenty of returning 4/5 pieces, too. Top-25 recruit Earl Timberlake joins the forward mix as well.

Virginia Tech already added some power to its frontcourt this offseason: Iowa transfer Cordell Pemsl (6-foot-9, 250 pounds). After redshirting last season, like Brooks at Miami, Wofford transfer Keve Aluma (6-foot-9, 240 pounds) joins the rotation as well. However, it still can’t hurt to kick the can on a prospect like Santos-Silva, who hails from Massachusetts.

As of Wednesday, Kentucky had yet to reach out to Santos-Silva; however, with the decision of Purdue transfer Matt Haarms to head west to BYU, Kentucky may have to look for other options.

Can Miami return to the ACC’s upper echelon with Nysier Brooks and Earl Timberlake?