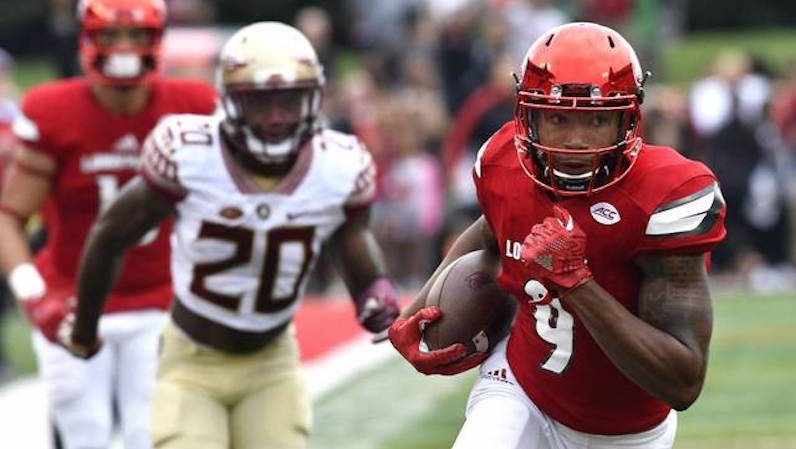 Louisville football will return the most exciting player in college football in 2017 — Heisman Trophy winner Lamar Jackson. That is no secret, just like it is no secret that lightning strikes whenever this guy gets going in the open field. Well, one of those two things may not be true.

However, what is true is that Louisville is fortunate to have Jackson. The Cardinals will have to deal with a new nucleus of skill-position players, which could spell trouble. For that not to happen, though, Louisville needs junior receiver Jaylen Smith to rise to the occasion and become a top-flight wide receiver.

Jamari Staples, tight end Cole Hikutini and All-ACC receiver James Quick are gone. Those three guys, according to Football Study Hall, were the three most heavily targeted players on Louisville’s roster in 2016. They combined for 209 targets last season; as a team, Louisville receivers were targeted 404 times. This means that those three departing players accounted for 51.7 percent of the team’s targets, which is a lot of production.

Quick, Staples and Hikutini also combined 18 touchdowns on 131 receptions — good for a strong catch rate of 62.7 percent. Additionally, per cfbstats.com, those three teamed up for 80 first-down receptions, 49 receptions of 15-plus yards and 22 receptions of 25-plus yards. That is a lot for an offense that ranked No. 21 nationally in terms of Football Outsiders Passing S&P-plus metric.

This is why so much will be on the shoulders of Smith in 2017; he is easily the most experienced returning pass-catcher, especially now that Reggie Bonnafon — Louisville’s Ben Zobrist — will spend time at running back, too. Jackson will have to rely on Smith heavily.

Out with the old, in with the new

Louisville fans should not panic just yet, though. Smith was solid a season ago and has nice chemistry with Lamar Jackson.

According to Football Study Hall, Smith was targeted 46 times last season — fourth-most on Louisville’s roster (11.4 percent target rate). He hauled in 27 of those targets for a catch rate of 58.7 percent. The Cardinals may need to improve a little on the overall efficiency here, but that is not a bad start.

Smith’s catch rate could be higher, but that would likely come at the sacrifice of his explosiveness. As a sophomore, Smith was tops on Louisville’s roster in yards per catch (22.2) and yards per target (13). One-third of Smith’s receptions went for at least 25-plus yards, according to cfbstats.com. And those 22.2 yards per reception were the second-highest total in the ACC, too — behind only Pitt’s Jester Weah.

His best game of the season was his dynamic performance against Boston College, when Smith caught six passes (on eight targets) for a career-high 123 yards and a touchdown.

The key to the game: Scoring points (no duh)

Speaking of touchdowns, they are rather important. Smith, who stands 6-4 and 210 pounds, can be a solid red-zone threat, too. Per NCAAsavant.com, Smith snagged 53 percent of his red-zone targets in 2016 — a number on par with Virginia Tech’s Isaiah Ford. One of those came in Louisville’s demolition of Florida State last September.

In total, Smith caught six touchdowns as a sophomore, which was tied for 15th-most in the ACC. Not bad for a guy who can also use his hands for playing the piano. There will be more to come in 2017.