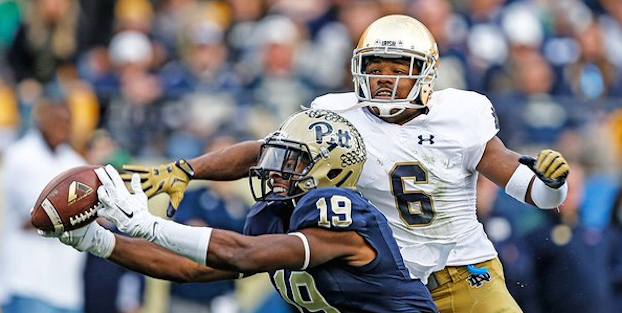 In two of the last three NFL Drafts, a Pittsburgh wide receiver has been selected within the first five rounds. Devin Street was taken 146th overall (fifth round) by the Dallas Cowboys in 2014, and just a few months ago, the Cincinnati Bengals drafted Tyler Boyd 55th overall (second round). These are the two most recent examples, but plenty of pass catching Panthers have entered the NFL in the last 15 years, including Larry Fitzgerald, Antonio Bryant and Jonathan Baldwin.

Boyd — who set school records for receptions (254) and receiving yards (3,361) — was the most prolific receiver in the ACC a season ago; he led the conference in both targets (126) and receptions (91), according to SB Nation’s Billy Connelly. It will be incredibly challenging to replicate that production (their run game will obviously be the offense’s bread and butter); it will likely take a collective effort to achieve that level of aerial potency, but having a receiver like Dontez Ford, the redshirt senior who transferred from Syracuse, on the roster is a good place to start.

To find out why Dontez Ford should be poised for a breakout season, sign up for basic access to ACCSports.com.